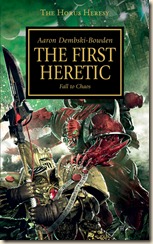 A Legion falls from grace, and the roots of Heresy are sown

Amidst the galaxy-wide war of the Great Crusade, the Emperor castigates the Word Bearers for their worship. Distraught at this judgement, Lorgar and his Legion seek another path while devastating world after world, venting their fury and fervour on the battlefield.

Their search for a new purpose leads them to the edge of the material universe, where they meet ancient forces far more powerful than they could have imagined. Having set out to illuminate the Imperium, the corruption of Chaos takes hold and their path to damnation begins.

The First Heretic is a novel of three parts – first, the Word Bearers are fully rendered through their actions and the legacy they leave behind on worlds they bring into “compliance” with the expanding Imperium. This first part also chronicles the legion’s reprimand from the Emperor (who ever more in these novels comes across as remote and aloof, not to mention slightly fickle). Thus begins Lorgar and his legion’s quest to discover the truth about divinity, gods, faith and worship in the universe – and, ultimately, the beginning of their fall to Chaos and the Horus Heresy.

The jump to the second part of the novel (merely three years) was done well, and the author offers some jarring action to suck you in once again – it was to be the point I stopped reading for the night, but it ended up hooking me until I had to stop at 5am. In the second part of the novel, a small selection of the Word Bearers and their Primarch come face-to-face with the Chaos powers and the ‘truth’ of the gods and the old faiths. It is the beginning of the end, and what Lorgar discovers will forever shape the future of the Imperium and the galaxy it hoped to shape and control. It also fundamentally changes the lives and futures of Argel Tal and his chapter of the Legion, as they become the first Space Marines touched by Chaos.

The final part of the novel jumps forward again in time, forty years to the Isstvan V betrayal (which has already featured in a handful of other Horus Heresy novels). This is the first time the novel features the huge battle scenes many will be familiar with from Warhammer 40,000 fiction, and the author has a gift for putting the reader right in the centre of the action. It will also please many readers that there is a high compliment of Primarchs featured in the novel.

All the elements of the novel – the author’s prose, description, characterisation, pacing and plot – mesh perfectly, creating a brilliant, engaging 40k novel with a difference. This isn’t a novel of carnage or endless gun-play. Rather, Dembski-Bowden has gone deeper, investigating the raison d’etre of the Astartes, the Crusade, and the nature of faith in this era. Like Graham McNeill’s A Thousand Sons, it’s a more thoughtful novel than others of the 40k setting, and is all the better for it. Even Argel Tal, the primary protagonist of the novel, ferociously loyal to his Primarch and the Emperor, is allowed doubts as he battles with the new knowledge he learns in the Eye of Terror, so at odds with everything he has spent two centuries protecting, believing, and killing for.

After reading two of Dembski-Bowden’s short stories (in here and here) and listening to his audiobook, it was gratifying to finally get to try out a full-length novel: here is evidence that the author can write superbly at length, and definitely belongs among the upper-echelons of Black Library writers. The author’s the least-tested to be given a crack at the Horus Heresy series, but damn was that a superb decision by the Black Library powers-that-be. The novel benefits from the familiar setting, of course, but the author’s obvious gift for writing brings the universe and characters evocatively to life on the page. I can’t help wondering what the author would be able to accomplish outside of the confines of the Warhammer 40,000 setting.

The Word Bearers are quite a mysterious legion – they’ve featured throughout the Horus Heresy series (though often represented by only Erebus – who, strangely, is not a considerable presence in this novel), so it was certainly nice to get a novel based predominantly around them and their fall from favour and grace. It’s ironic and tragic that the Word Bearers were persecuted for worshipping the Emperor: in the ‘current’ 40k timeline, he is worshipped by all loyal Space Marines, the entire Imperium, and especially the fanatical Ecclesiarchy. This makes the Word Bearers a rather tragic legion, with a tale of betrayal and loss, not to mention ultimate vindication (not dissimilar to the Thousand Sons, whose story is told in Graham McNeil’s superb A Thousand Sons).

The novel touches on a lot of the history of the Horus Heresy, and I found Dembski-Bowden’s treatment of the material deft and engaging. If you are unfamiliar with the series, or the setting, then you might be a little lost, as the author delves quite deeply into the era’s lore and history, without giving away too much detail (as always, there’s a level of assumed knowledge with Black Library novels that might not always allow for casual discovery). If you’re a fan of the series, however, then this is an absolute must-read.

One thing is clear: if the Horus Heresy series continues to improve as it has over the last few volumes, the series will only go from strength-to-strength in the future.

Utterly brilliant, I loved this novel.