Ten Years On: “The Brethren”, by John Grisham (Arrow/Doubleday) 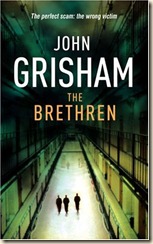 And three former judges who call themselves “the Brethren”: one from Texas, one from California, and one from Mississippi. They meet each day in the law library, their turf at Trumble, where they write briefs, handle cases for other inmates, practice law without a license, and sometimes dispense jailhouse justice. And they spend hours writing letters. They are fine-tuning a mail scam, and it’s starting to really work. The money is pouring in.

Then their little scam goes awry. It ensnares the wrong victim, a powerful man on the outside, a man with dangerous friends, and the Brethren’s days of quietly marking time are over.

I first read this novel when it was published in 2000. It was the first novel by Grisham that I ever read, and it set me on a two-month-long Grisham-marathon. Ten years after it first appeared, I thought it would be a good candidate for the first instalment of my ‘Ten Years On’ series.

There are basically two main storylines that run concurrently: that of the Brethren at Trumble, and Aaron Lake’s presidential primary campaign. It’s not stated how they connect, but one quickly figures it out (otherwise, there would clearly be no point in having them both in the same novel).

It’s pre-9/11, and the Cold War is still on people’s minds, not to mention the fear of a renewed war – cold or otherwise – with a frustrated Russia. This is the nightmare scenario CIA chief Teddy Maynard is trying to push into the American consciousness. Maynard wants a pliable president, one with the CIA and defence department’s interests at heart. Aaron Lake is the perfect candidate – squeaky clean, respected but not flashy, and a work horse on Congressional defence committees. The political side of this novel could be characterised as the military-industrial-complex meets Wag the Dog – a distillation of everything conspiracy theorists (and, increasingly, more-sane citizens) worry about the American democratic process – that is, secret moneyed interests in the defence industry buying the election for a candidate who sells his soul for cash and political fame. Only, it’s also as if the conspiracies about the military-industrial-complex are not only real, but they’re not big enough – the CIA is trying to pick a president, and they’ll engineer international events to prove him a foreign policy visionary, and in the end scare the American public into voting for him, in return getting their increased defence budgets and an eternal state of readiness.

Maynard is wonderfully Machiavellian. He embodies much of the contents and suggestions in The Prince, yet Grisham manages to keep him from becoming a cartoon. Lake comes across as the genuinely well-intentioned candidate who quickly becomes enamoured with the status and trappings of a political rising-star. The money is pouring into his campaign coffers in amounts as-yet unheard of (although, reading it now, the numbers are quite small compared to the 2008 election figures), and Lake is making the most of the political machine Maynard and company assemble for him. Everything is planned out – the ups and downs of Lake’s campaign, even the forthcoming general election. Everything will goes as planned. As long as there are no surprises, of course…

Meanwhile, the three judges at Trumble are working away at their mail scam, hoping to spend their remaining years of incarceration blackmailing older homosexuals still in the closet. Their scam is certainly cruel, and highlights the continued stigma attached to homosexuality in the US – even though things may have moved forward a little over the past decade, much of the sentiment described in the novel is the same as what one might hear coming out of Sarah Palin’s mouth. (Well, actually, what’s in The Brethren is far more tame than that.) When Grisham turns our attention to the judges’ victims, he deals with them in a very sympathetic way, as they struggle with the fear of their secrets being revealed.

The judges are angry at the world, and the idea for scam came from another prison and another time, when it was successfully carried out for years. There are times when the judges’ inherent concern for others does come through – particularly in the case of Buster, an extremely young prisoner sentenced to 48 years for a crime he not only didn’t commit, but had no way of committing. There is some balance between the judges – who have all the time in the world to scheme, and are surprisingly similar characters given their broad geographic origins – and their drunk attorney, who acts as their outside courier and money-man, a quite damaged character whose legal career has far from taken off.

Some things don’t change. In his announcement speech, Lake “became wonderfully angry at the Chinese”, and also “blistered the Chinese for their looting [of nuclear secrets] and their unprecedented military buildup. The strategy was Teddy’s. Use the Chinese to scare the American voters”, just as candidates on both sides of the aisle are doing today during the 2010 midterms. True, in the novel’s case, it's to distract from the activities of rogue Russian elements. Today, on the other hand, it’s to distract from US domestic problems.

The all-powerful forces of money behind politics are, as mentioned, a significant feature of the novel. Considering the recent Supreme Court ruling that officially opened up elections to seemingly endless amounts of corporate money, The Brethren was in many ways a prescient novel. The ability for corporations and special interests to buy elements of elections is frightening, and Grisham fully evokes the ease with which money can swing the course of American elections, and therefore politics as a whole.

I often forget how much social and political commentary Grisham can seamlessly cram into a novel (in just one chapter, for example, we get indictment of politics and the sorry state of daytime TV, for example). When I first read this, I missed a lot of the political commentary, not having had much exposure to US politics at the time (although, it was only a year before my professional interest in/obsession with it began). Second time around, and I know I got more out of this than before.

Despite my disappointment with The Associate, which I felt was based on a sloppy, shaky premise (and a little too transparent an attempt to recreate the feel of The Firm), Grisham remains one of the best authors writing today. Some may sneer, because he’s not producing “literature”, but his novels are original, intelligent, and exceptionally well-written and plotted thrillers.

All of Grisham’s characters are well-drawn and realistic – whether prominent in his novels or peripheral. The dialogue is natural, and the author’s prose flow perfectly. It was extremely difficult to put this novel down. Can one ask for anything more from a thriller? With a satisfying ending, The Brethren remains, for me, one of Grisham’s finest novels.

Artwork for the American 2000-edition, which I read first: 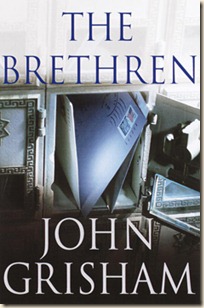