Books on Film: “The Runaway Jury”, by John Grisham

Can a jury be manipulated or bought? At what cost?

I’m on a bit of a Grisham kick at the moment (I’ll review his latest, The Confession, as soon as I get it read), and I recently watched The Runaway Jury, so I thought I’d add another to my recent “Books on Film” series. 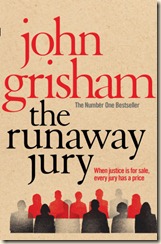 Every jury has a leader, and the verdict belongs to him.

In Biloxi, Mississippi, a landmark trial with hundreds of millions of dollars at stake begins routinely, then swerves mysteriously off course. The jury is behaving strangely, and a least one juror is convinced he’s being watched. Soon they have to be sequestered. Then a tip from an anonymous young woman suggests she is able to predict the juror’s increasingly odd behaviour.

Is the jury somehow being manipulated, or even controlled? If so, by whom? And, more importantly, why? 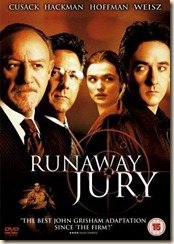 A synopsis of the movie:

Based on Grisham’s bestselling The Runaway Jury, the ultimate target has been changed: Grisham’s legal assault on the tobacco industry has been switched to the hot-button issue of gun control (no doubt to avoid comparisons with The Insider) in a riveting exposé of jury-tampering.

Gene Hackman plays the ultra-cynical, utterly unscrupulous pawn of the gun-makers, using an expert staff and advanced electronics to hand-pick a New Orleans jury that will return a favourable verdict; Dustin Hoffman (making his first screen appearance with real-life former roommate Hackman) defends the grieving widow of a gun-shooting victim with idealistic zeal, while maverick juror John Cusack and accomplice Rachel Weisz play both ends against the middle in a personal quest to hold gun-makers accountable.

The Runaway Jury, the seventh Grisham to be made into a movie, focuses on the gun business in America, rather than the tobacco industry of the novel. As the synopsis suggests, this might have been a ploy to distance the movie from The Insider, which came out roughly at the same time (and is, actually, another excellent movie). Like all the movies based on Grisham novels, it’s great viewing and intelligent. The plot comes along at a fair clip, unfolding for the viewer at a perfect pace to keep us guessing and engrossed. However, given the level of detail one would expect in a Grisham novel, one can’t help feeling the plot unfolds just a tad too quickly in the movie, and as a result I’m convinced the novel would be an eminently more satisfying endeavour.

While I am mostly against the gun culture and trade in the US (at least, and admittedly, the politicised element of it), I find the idea of suing a gun company over the death of a family member a little strange. The case is attempting to show that the Vicksburg Gun Company has a “deliberate and negligent” distribution policy/process. Surely this is a different issue? Sure, they made the gun – but that’s legal (even if it does have a “print-resistant finish”). Sure, a lot of their policies and business strategies are predatory and completely mercantilist – could we expect different from any other company? (Certainly not US banks, as we’ve discovered in the past couple of years...) It’s a question of responsibility, and who has the ultimate responsibility of what is done with a company’s products, specifically firearms. That is the central focus of the movie. I agree that in the case of controlled products like firearms, tobacco, alcohol, the vendor has a responsibility and, depending on reward schemes offered by the manufacturer, they also have a responsibility. The scenario offered in the movie is one so patently dishonest that a monkey should have been able to argue a win, and yet the case offered by Hoffman’s character seems a bit limp. In fact, the character isn’t written with much depth as far more focus goes to Hackman’s ‘bad-guy’. Fair enough, but Hoffman is a superb actor and it’s a pity his character wasn’t written more convincingly.

“Never before has a jury found the gun industry liable for murder.”

The sentiment of the movie is right: with entrenched and powerful gun interests in Washington, there’s no hope of changing the gun industry without a huge, sensational case like this. Congress won’t change anything, because of the clout of the NRA. A court case can start the ball rolling, it can send it through to the Supreme Court. But even then, there’s no guarantee – it’s far more politicised than one hopes or would prefer.

I must admit, I’ve not read the novel (yet), and after watching the movie, I find myself unsatisfied with the conclusions it comes to. Not necessarily because I disagree with the conclusions, but because the medium doesn’t allow for as much depth as a novel. True, the ultimate target in the novel is different, so it would be interesting to see how the case against the tobacco industry unravels, and how the jury tampering fits in.

The stats are well known, the arguments against (certainly when compared to non-gun nations) are logical and clear. It’s an emotional issue that is argued too much by the Gut.

The movie as a whole is entertaining, as I’ve mentioned. But, even given its near-two-hour length, it feels a little too much like it is only skimming the surface of the issues. Naturally, one can expect this from a big-budget Hollywood movie, but it does raise questions on the viability of transitioning these types of novels into the film medium. It works as visual entertainment, but I imagine the novel has so much more to offer someone interested in the subject – or, at least, the subject of jury selection and tampering, rather than the gun trade (for which I would recommend Richard North Patterson’s The Balance of Power).

Well worth watching (Hackman, Hoffman, Cusak and Weisz are all brilliant), but don’t equate it too closely with Grisham’s novel or other written output.

Posted by Civilian Reader at 7:19 PM