“The Accused”, by Mark Gimenez (Sphere) 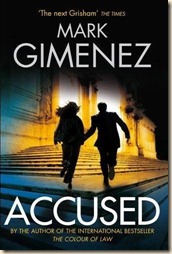 After years of silence, Texan lawyer Scott Fenney receives a devastating phone call from his ex-wife. She has been accused of murdering her boyfriend, Trey – the man she left Scott for – and is being held in a police cell. Now she is begging Scott to defend her.

Scott is used to high-stakes cases, but this one is bigger than anything he has handled before. If Rebecca is found guilty, under Texan law she will be sentenced to death. He will have her blood on his hands. As he prepares to take the stand in the most dramatic courtroom appearance of his life, Scott is forced to question everything he believes to get to the truth - to save the life of the ex-wife he still loves...

This is the second novel by Texas-native Gimenez to feature A. Scott Fenney. It’s not necessary to have read The Colour of Law, as Gimenez fills in the blanks just enough with some short passages of re-cap; there’s not too much detail to bore readers (those familiar and unfamiliar with The Colour of Law), and not enough to ruin reading the first novel should you wish to go back and do so – something I’d recommend you do.

As with all Gimenez novels, the author manages to include plenty of social commentary in his novels: wrapped in the narrative of the legal case and Fenney’s daily life in Texas, he drops in comments about the rich-poor divide, the influence of money on American society, and also issues of race (related to money, politics and so forth). While his commentary is not arch or particularly in-depth (this isn’t a lecture), it adds a good element to his writing that helps create a better picture of the US and Texas in particular, as well as provide a little bit more intellectual depth to his stories – in this way, he really is “the next Grisham”, as The Times have dubbed him. The author’s clear affection and interest in his home comes across well, and you almost feel familiar and at home in the novel, even if – like myself – you’ve never been to Texas.

The Accused is, in many ways, predominantly a study in character. Fenney has to contend with everything life throws at him: two young daughters (one adopted), mounting bills, financial constraints, braces, single parenthood, Ford Stevens (his former employer) trying to lure him back with tempting offers that would solve all his problems for the price of his soul… It’s clear to see that Fenney’s got a full plate. When Rebecca calls, however, his life only becomes more complicated.

The novel offers up some pretty interesting characters – Fenney's support team is a diverse bunch, and it’s impossible not to immediately like the world-weary Galveston District Attorney, Rex, who’s trying to train his shoe-in (political patronage & legacy) replacement in what the law’s really about. Not all of the characters are likeable – Rebecca comes across as spoiled and ‘hipster-tortured’, talking about how “the walls had been closing in” on her, when Scott had been doing fabulously, giving her everything she ever wanted (particularly shoes), so I never learned to sympathise with her. In a way, this made Scott’s devotion to her difficult to swallow all the time, but it certainly helped bolster his image as a latter-day saint (the Galveston assistant DA makes a quip about this early on, and plenty of disbelieving comments are voiced when people hear he’s defending the ex-wife who publicly cheated on him). Of course, a celebrity murder trial brings with it other obstacles Scott must deal with: a pitbull-with-lipstick reporter, with few scruples; a politically ambitious judge, interested in little more than the exposure she’ll get from allowing total TV access to cable news (another character I instantly disliked); angry golfers and their WAGS; the mob and a drug cartel. Oddly, some of the more decent and interesting people he meets are these latter career criminals…

There are echoes of the ongoing Tiger Woods scandal: the beloved, all-American golf hero (and murder victim), Trey, is unveiled as not at all as wholesome as the media would have us believe. There is a mention of Tiger’s ill-advised texting of a mistress, so The Accused was written after the story broke, and it certainly makes this a timely release, allowing Gimenez to write some commentary on the cult of celebrity and the sheer amount of money sloshing about in professional sport in the US.

Despite the occasional minor lapse into schmaltz or over-emoting, The Accused is an engaging and character-led legal thriller. Gimenez’s dialogue and prose are as fluid and natural as we’ve come to expect, and the pacing of the plot will keep pulling you along. When we’re finally brought into the court-room, the author actually makes it gripping and tense, even though we’ve been following Scott and his team’s investigation every step of the way. The Accused, therefore, offers the reader everything they could want from a thriller, and is a very satisfying read.

If you haven’t yet discovered Mark Gimenez, then you should really make it your next thriller priority.