I must admit to never having read a single novel by Brandon Sanderson, even though I’ve only ever really heard good or great things about his work (except for one review, but the reviewer doesn’t appear to like anything, so can probably be discounted).

The cover artwork for the UK edition has just recently been released (thanks to Aidan at A Dribble of Ink for posting it). As I thought it was rather striking, I decided I’d use this opportunity to post a little something about the novel.

First off, here’s the UK artwork: 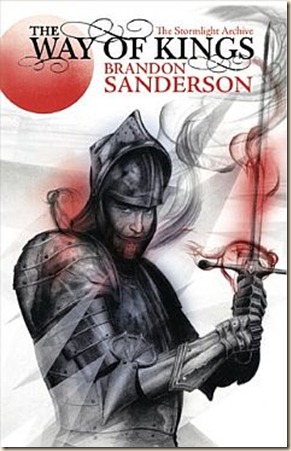 Obviously, they’re sticking with the formula that worked for the UK editions of Sanderson’s Mistborn trilogy: 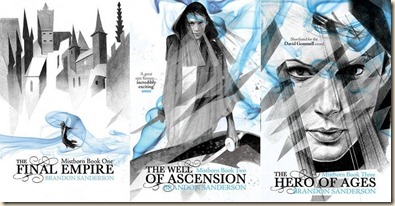 The US artwork fits in better with the style that is favoured over there – although, as I’m sure I’ve said before, it’s rare for me to prefer a US cover. Here it is: 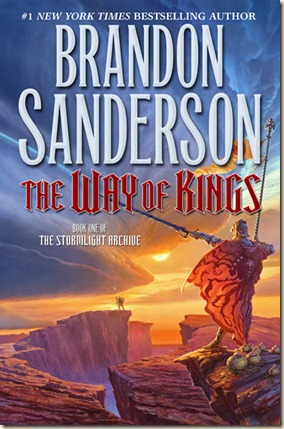 To finish off, here’s the synopsis of The Way of Kings, from the publisher’s catalog:

The Way of Kings introduces the three protagonists who will be our windows on the strange and wondrous world of Roshar and the drama about to unfold there:
Dalinar, the assassinated king’s brother and uncle of the new one, is an old soldier who is weary of fighting. He is plagued by dreams of ancient times and legendary wars, visions that may force him into a new role he could never have imagined.
Merin, a highborn young man who has been brought low, indeed to the most miserable level of military slavery, and like Ben Hur must suffer and struggle to survive and rise again.
Shallan, a naïve but brave and brilliant young woman who will do anything to save her impoverished noble house from ruin.
These are people we will come to know deeply and take to our hearts. But just as important to The Way of Kings is a fourth key ‘character,’ the unique world of Roshar itself, a richly imagined setting as real as science fiction’s Dune, as unforgettable as epic fantasy’s Middle Earth. Through all the volumes of The Stormlight Archive, Brandon Sanderson will make Roshar a realm we are eager to visit.

I’m certainly interested to try The Way of Kings, a series by Sanderson I can get into from the ground up. With luck, I’ll be able to get you a review ASAP.

[The Way of Kings will be released in the US by Tor, and in the UK by Gollancz]
Posted by Civilian Reader at 1:34 AM