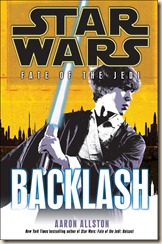 Backlash is the fourth book in a projected nine-book series, and one that has – for the main – entertained thus far. Just to get my main concern about the series out of the way quickly, let me just write this: Like all middle-books, it suffers from the expected (and delivered) lack of any conclusions. This is something that plagued the middle books in the previous nine-book sequence, Legacy of the Force, and does make me question the wisdom of sticking to the nine-book formula. In my own humble opinion, trilogies and duologies might prove the better routes to take in the future. That being said, I shall now return to my review of Backlash which is, thus far, the best book in the Fate of the Jedi sequence.

Like every book in the Star Wars series of novels, this one took a few chapters to get in to; not because Allston’s writing is in anyway deficient – far from it, he’s easily one of the best authors that have ever been attached to this universe (I bet he could have done a great job re-writing the scripts for episodes I, II and III, for example…). The problem is the size of the main cast of characters: there are now perhaps too many ‘main’ perspectives, which if you’re starting a novel you need to indicate and (re-)introduce to the readers. We have Luke and Ben Skywalker; Han and Leia Solo; Allana/Amelia Solo; Galactic Alliance Chief of State Natasi Daala; Jedi Jaina Solo and Empire Chief of State Jagged Fel; some Imperial conspirators; and the Jedi under siege in their Temple on Coruscant. For the first 50 or so pages, the perspective of the novel shifted almost every page, which made it very stop-start and difficult to sink in to.

I think what bothers me most about the over-frequent switches in perspective is a comparison with the older novels, such as Kevin J Anderson's and Timothy Zahn's, which had smaller casts. Not by much (the ‘classic’ characters were all still there, of course), but enough that you got a story from maybe 5 perspectives, rather than 10+.

Anyway, that’s really only an issue for the first few chapters as, when Allston finally let’s the story flow, sticking with single perspectives for entire chapters or more, Backlash is utterly gripping and Allston’s prose drag the reader on through events. Whether it’s the tense events on Dathomir, back with the embattled Jedi order on Coruscant, or Daala’s and Fel’s continued troubles with conspirators, if given a decent amount of space, Allston's writing and plotting are exceptional and the reader will find themselves hooked. There’s plenty of action (for once there’s no dogfighting in space, which was overly-featured in previous sequences) and the pace never really lets up; after all, as Jaina Solo says herself in the novel:

The Jedi and Galactic Alliance are only slowly coming to terms with the new, greater threat of the new Tribe of the Sith that at last made first contact with the Skywalkers at the end of Abyss, surprised at their different tactics and apparently guiding principles:

Overall, Backlash is a satisfying and entertaining read that bodes well for the next in the series, Christie Golden’s Allies (published May 27th), especially given the cliff-hanger ending.