I was blown away by N.K. Jemisin’s debut, The Hundred Thousand Kingdoms (review here). After reading the interview contained in the back of the book, I became eager to read the second book in the series (rather obnoxiously eager, if I’m honest). The artwork for the novel, The Broken Kingdoms, just screams out to be shared and admired. So, I shall let the art do the talking, and here it is: 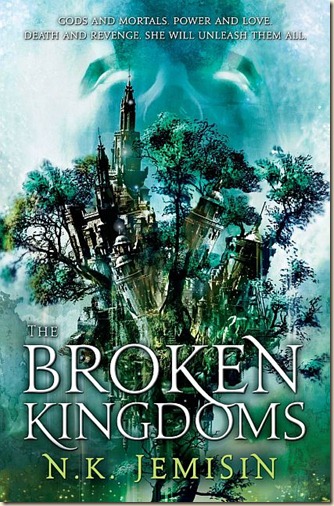 In my humble opinion, this is stunning. Lauren Panepinto (designer) and Cliff Nielsen (artist) have done an exception job.

Scouring the interwebs for information on the book, it would appear that it’ll be released in the UK in November 2010 (Amazon UK claims the 4th November), and here’s the short synopsis I was able to find:

In the city of Shadow, beneath the World Tree, alleyways shimmer with magic and godlings live hidden among mortal-kind. Oree Shoth, a blind artist, takes in a homeless man who glows like a living sun to her strange sight. However, this act of kindness is to engulf Oree in a nightmarish conspiracy. Someone, somehow, is murdering godlings, leaving their desecrated bodies all over the city. Oree’s peculiar guest is at the heart of it, his presence putting her in mortal danger - but is it him the killers want, or Oree? And is the earthly power of the Arameri king their ultimate goal, or have they set their sights on the Lord of Night himself?

I have no doubt that The Broken Kingdoms will live up to expectations. (If artwork denoted writing quality – this is a lock.)