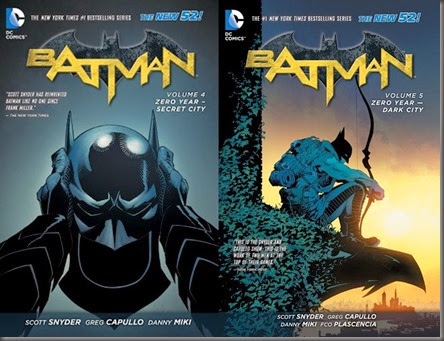 The New 52 origin of The Dark Knight delves into Bruce Wayne’s past with the Red Hood Gang and his run-ins with aspiring District Attorney Harvey Dent!

Before the Batcave and Robin, The Joker and the Batmobile, there was ZERO YEAR. The Riddler has plunged Gotham City into darkness. How will a young Dark Knight bring his beloved hometown from the brink of chaos and madness and back into the light?

I’ve always had a soft-spot for origin stories, as I’m sure many fans do. In Zero Year, Snyder et al, have created a very good, more extensive and explanatory take on the origins of Gotham’s Dark Knight. Other stories and collections have touched up this period of Bruce’s development from spoiled rich kid to crime-fighting genius, but none have done it this well. If you haven’t been reading the New 52 Batman, then I’d strongly recommend you start – either here or at the beginning of Snyder’s run. I don’t think you’ll be disappointed.

Volume 4 pretty much re-creates the background portion of Alan Moore’s The Killing Joke, but from Batman’s perspective, and with a little more focus on the wider actions of the Red Hood gang. Their fight against the new vigilante are relentless and bloody (Bruce is really put through the ringer, here). The story is very well-told, too. There are echoes with Nolan’s Dark Knight movie trilogy, but with shades of Fight Club and Gone in Sixty Seconds added in the back-up stories focused on Bruce’s overseas training stops. 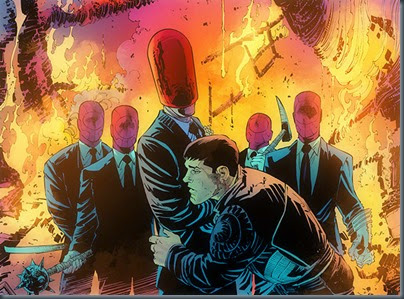 In Volume 5, things really get tricky for Batman and his new allies: the Riddler takes over the city (there is a strange leap forward in time, which wasn’t handled quite as smoothly or neatly as it could have been), and it is up to them to wrest control of the power grid and save the lives of their fellow Gothamites from the Riddler’s games. The story has an excellent flow to it, and there’s a nice, circular element to the narrative that takes us back to certain events in Volume 4. Snyder et al show us perhaps the most detailed account of the days leading up to the death of Bruce’s parents that I’ve ever seen. (Anyone know if it’s presented in greater detail anywhere else?) I really enjoyed this volume, made even better by the fact that it’s a pretty long book – not once did it feel like the story was dragging, and the creative team have done a wonderful job of making it visually and narratively engaging and attention-grabbing.

Across both books, and their back-ups, the artwork is fantastic – Capullo’s art is consistently brilliant, and the back-up artists (including Rafael Albuquerque, who has worked with Snyder on multiple other projects) offer welcome and refreshing alternatives. There really is nothing bad I can think of saying about the two books’ visuals – it’s all excellent. There were a couple of moments that were clearly meant to be homages to Frank Miller’s Batman work. First, there was this moment (thanks so the Mary Sue for putting together the image – I was reading the digital ARC, which has degraded artwork to prevent sharing, etc.)*: 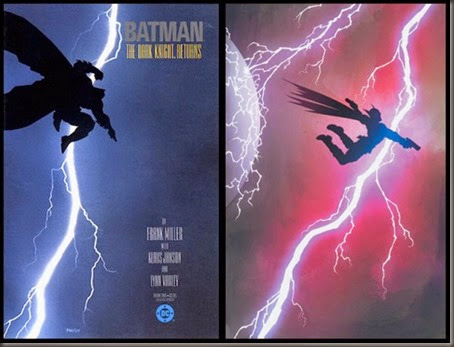 Miller’s The Dark Knight Returns (left) and the new image

And also this moment, which is another homage to a Dark Knight Returns cover (I put this one together):

Snyder’s work on the Batman series continues to impress and entertain, and also expand the Batman mythology brilliantly. I’m concerned about the growing number of Batman titles, though, because I don’t want the story from each to become so cross-pollinated that you can’t properly follow any of them without reading all of them. So, please, just don’t go the way of Marvel?

In all? Batman continues to be very highly recommended. If you’re a fan of the character, you need to be reading Snyder et al’s series. 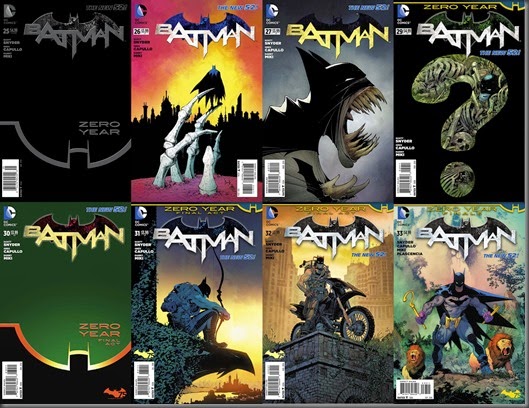 * That Mary Sure piece also has one other homage example, this time to the first appearance of Batman – also something I spotted, but I thought the Miller homages were far more striking, so decided to share them.

Posted by Civilian Reader at 3:42 PM