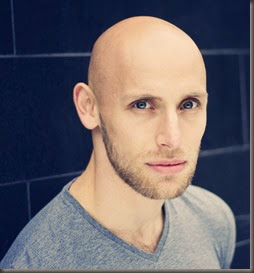 It’s a strange thing, finishing a trilogy. It comes with a sense of dislocation. I’ve spent the last five years – a sixth of my life – in a dream world: a London where the streets are lit by glass-skinned dancers with phosphorescent blood, and where the statues conceal a priesthood entombed by their Goddess in stone and bronze as a punishment, a London where the scaffolding can slide from the face of a building, rearticulate itself into a snapping, snarling steel wolf, and pounce.

It’s not letting go of the world that’s the strangest thing, though it’s letting go of the people. Because I’ve also spent the last five years in the heads of two teenaged girls. I’ve done my best to feel what they felt as they fell in love, and fought with their friends and were kidnapped by sentient barbed-wire parasites and took on the powers of urban gods. I’ve pretzel-twisted my thoughts into the shapes of theirs. To put it simply, within the bone enclosure of my skull, I’ve been them. And it’s been a trip.

I am little sceptical of the claim that writing is ‘hard.’ I mean, it is, but so is everything. By nature, I’m a monkey that wants to sit in the sun and eat bananas and unselfconsciously scratch unsociable parts of myself when they itch and… that’s it. There is no deviation from that state of simian bliss that doesn’t count as hard for me. However I’m pretty sure writing doesn’t compare to the difficulty, and let’s be honest - the courage - of doing something really difficult, like farming, or teaching or soldiering or midwifery

Still, it’s not all been fun and games and hijinks with blood-chilling monsters. Side effects of fantasy writing may include: fever, cramps, dizziness (from lack of sleep), diahorrea (verbal, about your book, which when it’s half-conceived no one else cares about), hallucinations, an inability to talk in complete sentences and the growing worry that you may not in fact be human.

That last comes from core activity of writing: grubbing around inside yourself for the truest and most important and most human thing you can lay your hands on and putting it on the page, and then showing it to other people. Because there’s a very real possibility they’ll look at that page and say ‘nope, doesn’t seem human to me’ and then what do you do? Like a lot of writers my ego is the size of the Yukon but has the damage resisting qualities of a Kleenex caught outside on a stormy day, and I think that would have felt like the most undeniable judgment, a kind of reverse Turing test, a double-blind, clinical trial of my soul. 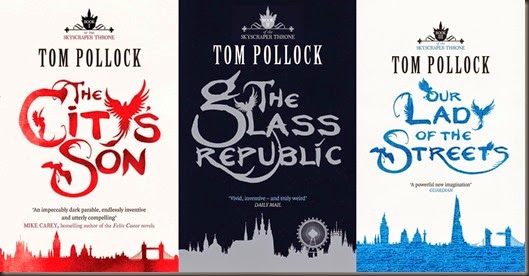 Until now, that was the scariest thing about writing, but now I’ve got something to top it: letting go. I need to stop being these people now, and make up someone else to be. After five years, I won’t lie, that’s a little intimidating.

I’ll do it though. I have to. I’ll put one sentence in front of another until I’m back gibbering incoherent bits of plot to innocent tourists who stop me on the tube to ask for directions. You know, back to normal.

It’s either that or learn to be a teacher, or a soldier, or a midwife. And you know what? I’m not sure I’m up to that.

Inventor of monsters, hugger of bears, Tom Pollock is the author of the Skyscraper Thrones series – The City’s Son (shortlisted for the Kitschies Golden Tentacle); The Glass Republic (shortlisted for the British Fantasy Award); and Our Lady of the Streets, which is out in August. All three are published by Jo Fletcher Books in the UK. The City’s Son is also published in the US by Flux Books (cover below).

For news on Tom’s novels and next projects, be sure to check out his blog and the Skyscraper Throne website, and follow him on Twitter. AND, if you’re in London, be sure to go to Tom’s signing at Forbidden Planet, on August 7th. 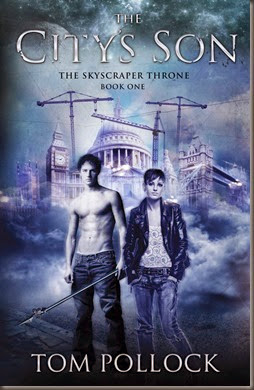