Upcoming: THE RETURN OF NAGASH by Joshua Reynolds (Black Library) 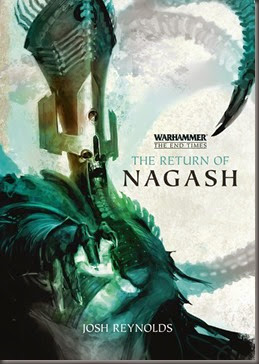 Announced rather quietly (well, more like suddenly) and coinciding with the tabletop game’s related releases, Josh Reynolds’s THE RETURN OF NAGASH details the story of the baddest-of-the-undead-bad in the Warhammer world. Here’s the synopsis:

The End Times are coming. As the forces of Chaos threaten to drown the world in madness, Mannfred von Carstein and Arkhan the Black put aside their difference and plot to resurrect the one being with the power to stand against the servants of the Ruinous Powers and restore order to the world – the Great Necromancer himself. As they set about gathering artefacts to use in their dark ritual, armies converge on Sylvania, intent on stopping them. But Arkhan and Mannfred are determined to complete their task. No matter the cost, Nagash must rise again.

I haven’t read any of the Undead novels published by Black Library (yet), and I’m not sure how this will connect with Mike Lee’s and Josh Reynold’s other undead/vampire novels. This one, though, I am most interested in. Partly because I do like good vampire/undead fiction. But also, and perhaps more keenly, because the cover story for the first issue of White Dwarf magazine I ever bought was all about the first version of the Nagash model. The magazine included a background section for the character, a short piece of fiction, as well as rules, etc. The background was, I thought at the time, very well-written and gripping – I became hooked on reading the background sections of the Warhammer Armies and Codex books. However, Nagash’s story stuck in my mind. And so, I am very interested in reading this novel. I’ll see what I can do about getting it read and reviewed A.S.A.P.

Posted by Civilian Reader at 2:46 AM