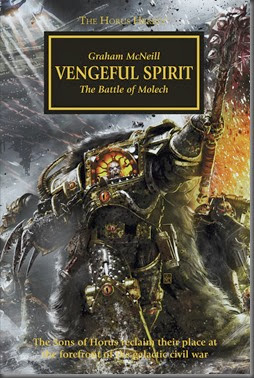 I’ve already posted the full artwork for Graham McNeill’s next Horus Heresy novel, Vengeful Spirit. Now, however, I’ve managed to dig up a synopsis, which gives me another opportunity to feature it – I’m sure everyone who reads CR is fully aware of how much I enjoy the HH series of novels and short stories. So, without further ado…

On the planet of Molech, the Titan Legions go to war against the armies of Horus.

Once the favoured son of the Emperor of Mankind, the name of Horus has become a curse to the loyal defenders of the Imperium, and a rallying call to the traitor forces tearing across the galaxy. While their allies wage war on a thousand different fronts, the XVIth Legion descend upon the Knight World of Molech – home to House Devine and their feudal levies, and a principal seat of Imperial military power. Just what could have drawn Horus to attack such a strongly defended planet, and what might he be willing to sacrifice to fulfill his own dark destiny?

I’m still not 100% sure when this is going to be released – Amazon UK has September 2014 listed as publication, but Black Library often releases things a little earlier through their own store/website. So maybe a couple months earlier? Needless to say, whenever it’s available, I can’t wait to read it.