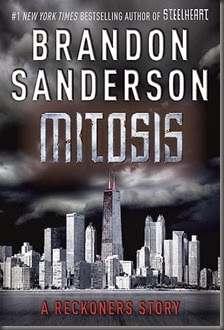 A good short story stop-gap between Steelheart and Firefight

Sanderson self-published this short story, set in the same world as his first super-hero novel, Steelheart. I rather enjoyed the novel (which was the first of the author’s that I’ve read), and when I stumbled across this I was very happy to be able to dive back into the world he’s created. I’m not going to include an official synopsis, as that will give away the ending of Steelheart.

Nevertheless, what you need to know (for both the novel and Mitosis) is that in this reality, super-heroes exist – something happened that bestowed upon a small percentage of the global population special powers. Unlike in the super-hero comic books of Marvel, DC, et al, the power has very much gone to most of these powered individuals’ heads, and they started using them for their own ends. In Chicago, Steelheart reigned supreme with a coterie of other powereds. Steelheart the novel was the story of a fight against this tyranny, spear-headed by an insurgent group known as the Reckoners and their new ‘recruit’, who is a bit of a geek, and has been cataloguing the powered dictators and criminals as a means to learn of their weaknesses.

Mitosis deals with a single powered individual: Mitosis. The story moves quickly, and there is a rather nifty homage (perhaps) to Agent Smith from second and third The Matrix movies. That is all I shall say on the specific plot of this story.

If you are familiar with Sanderson’s writing – be it The Way of Kings or his Mistborn series – then you are sure to know what to expect: brisk, engaging and professional storytelling. The man can certainly write, and I intend to get more of his novels read by the end of this year. [Famous last words, perhaps, but I managed to read three of the four authors I promised to last year…]

Short, but well-worth reading to hold you over until the release of Firefight.