Now Available in the US: “The Complete Malazan Book of the Fallen” by Steven Erikson

I have never read anything by Steven Erikson. At least, nothing novel-length (I may have read a short story of his at some point…). His Malazan Book of the Fallen series is a fan-favourite. When I first started blogging, it was also enjoying a prolonged re-read on Tor.com. Many bloggers and friends I have made in the SFF community love the series. And yet I’ve never tried it… Part of the reason is the prospect of devoting such an immense amount of time to reading the whole thing (10 novels, plus four written by Ian C. Esslemont). 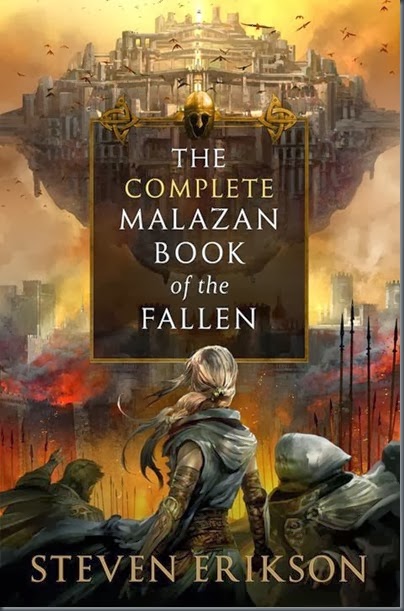 For those others of you who haven’t read the epic series, and if you live in the US, Tor Books has just released an eBook collection of the whole thing. Included in the collection are: Gardens of the Moon, Deadhouse Gates, Memories of Ice, House of Chains, Midnight Tides, The Bonehunters, Reaper’s Gale, Toll the Hounds, Dust of Dreams, and The Crippled God. Here’s the synopsis for Gardens of the Moon:

The Malazan Empire simmers with discontent, bled dry by interminable warfare, bitter infighting and bloody confrontations. Even the imperial legions, long inured to the bloodshed, yearn for some respite. Yet Empress Laseen’s rule remains absolute, enforced by her dread Claw assassins.

For Sergeant Whiskeyjack and his squad of Bridgeburners, and for Tattersail, surviving cadre mage of the Second Legion, the aftermath of the siege of Pale should have been a time to mourn the many dead. But Darujhistan, last of the Free Cities of Genabackis, yet holds out. It is to this ancient citadel that Laseen turns her predatory gaze.

However, it would appear that the Empire is not alone in this great game. Sinister, shadowbound forces are gathering as the gods themselves prepare to play their hand…

Posted by Civilian Reader at 8:40 PM