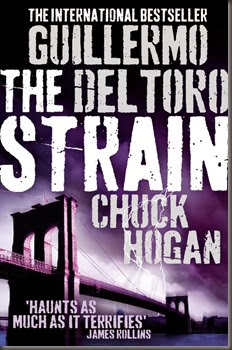 The start of the vampire apocalypse… It’s very well-written, but…

At New York’s JFK Airport an arriving Boeing 777 taxis along a runway and suddenly stops dead. All the blinds have been drawn, all communications channels have mysteriously gone quiet. Dr Ephraim Goodweather – head of a rapid-response team investigating biological threats – boards the darkened plane… and what he finds makes his blood run cold.

Meanwhile, in a pawnshop in Spanish Harlem, aged Holocaust survivor Abraham Setrakian knows that the war he has been dreading his entire life is finally here.

Before the next sundown Eph and Setrakian must undertake the ultimate fight for survival. A terrifying contagion has come to the unsuspecting city – hungry, merciless, lethal… vampiric?

It took me so long to get around to reading this. And it’s taken me a few months to get around to writing the review. I’m not sure why, but there we go. The first in del Toro and Hogan’s trilogy, it chronicles the events that spark the outbreak of a vampiric plague in New York, threatening the country beyond, and the toppling of the status quo. It’s an interesting novel, but one that I struggled with a fair bit, given its pacing. Conceived as a trilogy, this novel is basically the set-up and that’s about it. We learn a little of the background – minor moments from the vampire’s history, and the former-concentration camp inmate who discovered that it was feeding on inmates; and then, decades later, tracking it across to the New World.

The Strain is a novel that, in my mind, doesn’t really require too long a review. It is basically the opening act for the next two novels in the series, and doesn’t stand on its own. Things only really start to happen in the final 20% or so of the book. True, the story follows a more slow-burn, anticipatory-horror approach to unveiling the threat and seeing the vampires spreading across Manhattan and New York’s other boroughs. This slow pace irked me, I have to admit. It felt like a lot of hurry-up-and-wait. True, the authors give us a very good, detailed account of how vampires develop over time, and how the epidemic spreads. Also, how intransigent people are when it comes to being faced with the supernatural and inexplicable. But beyond that, when I finished the book I didn’t feel a need to immediately reach for book two (which I have). I’m sure I will, at some point, but at the moment, I have no burning desire to get on with the series.

As for the craft of the novel? Yes, del Toro and Hogan have done a very good job of covering all their bases, and creating their own vampiric lore that has more in common with zombie apocalypse tales (in the way vampirism is more like a disease than not) and plague outbreak. It is interesting, and it’s well-written. The characters are realistic and well-drawn, and the vampires are sufficiently and particularly horrific – mindless, feeding beasts that have more in common with the aforementioned walking dead than the more popular version of vampires. There’s a creepy and cool hive-mind quality to how they operate and how the primary vampire controls and directs them. I particularly enjoyed the flashback chapters that detailed the historical brushes with the creature. I hope we get a few more of them in the next book.

If you’re interested, or particularly driven, to dedicate yourself to reading all three novels in a row, I’m sure this is a very rewarding story. The pacing of the first threw me, sure, but I can’t fault the authors’ talents on display. It’ll be interesting to see how it translates onto TV…

The Strain is published in the UK by Harper, and by William Morrow in the US.