Robert Bailey is the author of THE PROFESSOR, a legal thriller to be published by Exhibit A Books late January 2014. 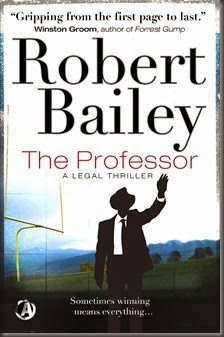 I was born from a family of storytellers and teachers. My mother taught English and reading, and my grandmother, a math teacher, was never without a book to read. My father, though a builder by trade, can still hold a room captive with his stories and jokes, and, as a little boy, I was always on the edge of my chair when he would rasp on about Coach Paul “Bear” Bryant and the legends that played football for the Crimson Tide.

As far as writers, John Steinbeck was a major early influence. As a kid, I loved his shorter novels, The Red Pony and The Pearl. As a high school sophomore, we studied The Grapes of Wrath, and Tom Joad remains one of my favorite characters in all of literature. As a southerner and an Alabamian that grew up to be a lawyer, To Kill a Mockingbird holds a special place. I think every lawyer wants to grow up to be Atticus Finch, and the story just had everything. It was thrilling, historical, funny and tragic. Just a remarkable achievement.

Later in high school and early college, I became enraptured with John Grisham, and loved Jack Brigance in A Time to Kill and Mitch McDeere in The Firm. I think it was these Grisham stories that really made me want to give writing a shot. Other writers that have been great influences are Greg Iles (I love the Penn Cage series starting with The Quiet Game), Michael Connelly (It doesn’t get much better than the Harry Bosch series), John Sandford, Lee Child, Winston Groom, Stephen King, Dean Koontz and Mark Childress.

When I decided I wanted to write The Professor, I picked up Stephen King’s memoir, On Writing, and have probably read it at least three times. Not only is it entertaining, but King’s insights on the writing process are insightful and inspiring. I would recommend it for any aspiring writer.

Finally, my time at the University of Alabama School of Law in Tuscaloosa certainly influenced The Professor. In fact, the idea for the story was hatched while day dreaming in class and wondering whether my professors could still try a case after years in the classroom.