Upcoming: “The Truth About the Harry Quebert Affair” by Joël Dicker (Maclehose Press) 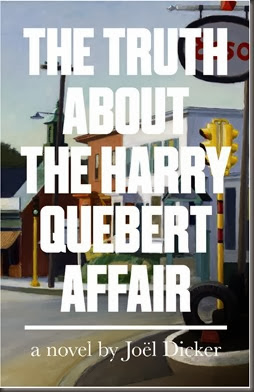 I’ve been seeing a lot of buzz surrounding Joël Dicker’s latest novel, The Truth About the Harry Quebert Affair. Last year, I started reading more (literary) fiction, and I’ve become as keen on finding new novels in all genres, and not just SFF, to feature on here. I’ve become particularly interested in American literary fiction – author such as Michael Chabon, Donna Tartt, Richard Russo, and Claire Messud to name but four (all but one of whom have featured on the blog already). It was therefore interesting to me that Dicker’s novel has created such a storm (it has sold over two million copies on the continent) and that it has even been hailed as having “all the elements of the Great American novel” (La Croix), despite Dicker actually being Swiss. Now that Maclehose Press has unveiled the UK artwork for the novel, I thought it a good time to post a quick something about it.

The novel is translated by Sam Taylor, who also translated HHhH. Here’s the synopsis…

Marcus Goldman, the toast of the New York literary scene, is at his wit’s end after being struck by writer’s block. Desperate not to lose his new found fame and in search of inspiration he decides to spend a few weeks in New Hampshire at the home of Harry Quebert, world famous author and his mentor from university.

During his stay, Marcus discovers that in 1975, aged 34, Harry had an affair with 15 year old Nola Kellergan. The summer of their affair, Nola disappeared after she was seen running through the woods, covered in blood. No one has seen Nola since and no one knows what happened.

Then the unthinkable happens, 33 years after her disappearance, the body of Nola Kellergan is found in Harry’s garden. Determined to prove Harry’s innocence, Marcus gets embroiled in the murder case of the century, while everywhere in America people are asking: Who Killed Nola Kellergan?

Not just a book about an unsolved murder case, The Truth about the Harry Quebert Affair explores the price of fame and the seduction of success, the ferocity of the publishing industry and the power of the media, love in all its forms and what it means to be a truly great writer.

The Truth About the Harry Quebert Affair is published in the UK by Maclehose Press, in May 2014.