Catching up with TOM LLOYD 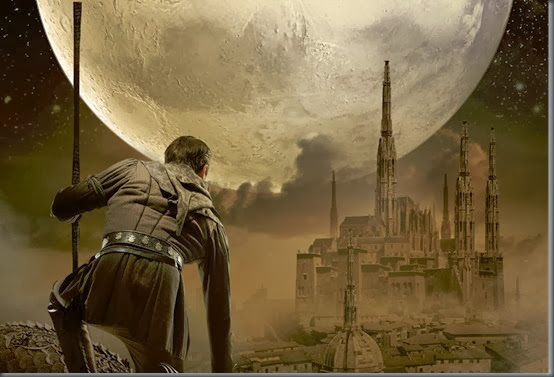 Tom Lloyd is the author of the Twilight Reign epic fantasy series, which was completed earlier this year. Today, Gollancz publish the first in his new series, Moon’s Artifice. To mark the occasion, I caught up with Tom to get an update since my first interview with the author…

Your first fantasy series, The Twilight Reign, came to an end this year. How does it feel to have it finished?

Weird – damn good, but still weird. I started on the project when I was 18, so it’s been the major constant of 12-14 years of my life! Even when I was signed up by Gollancz I don’t think I appreciated just how much of my life was going to be devoted to one set of characters, one plot. It was just always there, so to suddenly realise you’ve written the last words puts you into mourning.

Of course, the very last words of Dusk Watchman are the inscription on a memorial stone – I can’t remember if I’d finished all the stories of God Tattoo by then, but most of them. Certainly in my mind, that final part of the epilogue was what really brought it home to me. When I wrote the last words and typed the inscription, I think I might have needed a few moments to myself... And again when I did the second draft of it and finally got the tone of those last couple pages as I really wanted it.

So yeah, years of my life and the voices in my head that had become my friends, all gone. I think that’s one reason why I didn’t want to go straight into an epic again. I didn’t want to have a project that I’d compare so directly with Twilight Reign. Plus I was knackered and the idea of planning a series-spanning plot was exhausting. I wanted a stand-alone book and handily had the bones of one already sketched out. I have an epic (or maybe two) idea at the back of my mind, but there’s the Empire of a Hundred Houses series and then another both ahead of them in the queue. 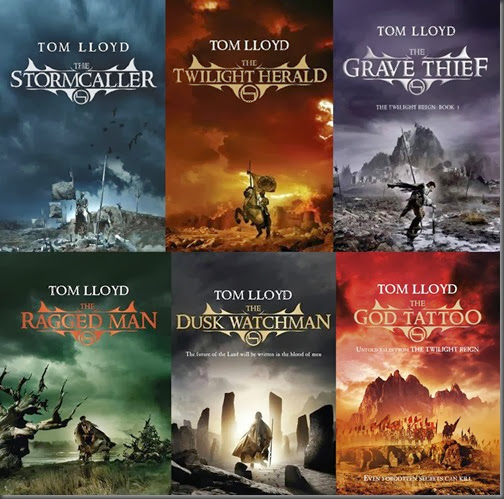 No book is ever finished, you know that! But at the same time, I’m really happy with it. I know it’s not a simply plot and not a book you can idly flick through - while no-one describes me as a grimdark writer (because of less of an emphasis on cynicism by characters I believe), it’s pretty dark. The tone is grim for large chunks of it, a lot of people die and a lot of people get screwed up by all that happens to them. If you’re writing about war and nations-spanning conflicts, you have to acknowledge the casualties of that - the people who get crushed under the wheels of it all.

So yeah, some people will always have criticisms of any book and I’ve seen reviews that didn’t like how I’d done certain things, but it’s the story I wanted to tell - grim and dark as it may be. I’d happily to do a quick brush-up job on Stormcaller as reading it back I think I over-complicated some passages and interrupted the flow, but aside from making bits easier and quicker to read I wouldn’t want to change it. The plot’s hardwired into my brain for a start, unpicking it would probably cause an aneurism. 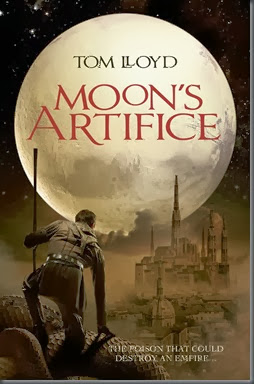 Now. Moon’s Artifice. The first in a new series. What’s it about?

Ahem, well it’s a secondary world fantasy, but not an epic. It’s being described as swords and sorcery, but that conjures images of bearded wizards and over-muscled barbarian warriors in my mind so I’m trying to coin the term “hood and dagger” to describe an urban-set fantasy action/thriller, albeit to minimal effect!

Anyway – we have a policeman who, at the same time as he finds out his married high-born lover is pregnant, stumbles over a mystery. With no idea what he’s involved in, he’s tasked by an interfering god to find out what’s going on – his only clues being an unconscious thug dressed like an assassin and the accidental poisoning of a little girl. Quickly matters blossom into a conspiracy that threatens to overturn the rigid rules of the Empire and lead to the deaths of thousands at best – and it quickly starts to look like Narin and his new friends need to step up and stop them. Everything is set in the capital city of a fractured Empire – the meeting place of the great nations-hegemonies who have ensured the Emperor’s position is more spiritual than temporal – and takes place in something close to one week.

What was it like starting a new series from scratch again?

Strange – partly because it wasn’t from scratch. When I was looking for an agent for Stormcaller, I realised I might have to just write it off as the book I learned to write with. So I started a new one with very little idea about what I wanted from it. I knew it had to be a different sort of book as I was still learning this writing thing, and it was going to indulge the samurai obsession I had back then. Plus I had a title – Moon’s Artifice – even if I didn’t know how or why that poison fitted in the plot exactly. I knew it did in some nebulous way and just had to wait until the voices whispered exactly how.

You’ll be shocked to hear those chapters weren’t very good, but eight-odd years later, I had a much better idea of what I wanted! All those ghostly half-formed ideas at the back of my mind had had a chance to mulch around and create the bones of a plot. From there, you actually get a chance to pick what you want to do, which was quite fun. I don’t write with a specific message or agenda in mind, I just want to tell the story in my head in a way people will enjoy.

What lessons did you learn from writing Twilight Reign, and how did your experiences with that series translate into your approach to Moon’s Artifice?

I learned to write while doing the Twilight Reign and because I was doing a shorter, less complicated and faster-paced book, I had to actively consider how to adapt for that. A lot of it was simply deciding what was appropriate to the sort of book I was writing. With the experience of a classical European medieval epic fantasy, I had a number of things I didn’t want to do – not that I was rejecting them, I just wanted to do something new and different. Fortunately the Empire setting was halfway there already and just needed some tweaking plus internal consistency which ironed out the creases. Some of which, I must admit, was added by my agent who took me out for drinks and brutalised the setting and idea until he was satisfied with it. Given he’s only making money on how good my books are, that’s the mark of a good agent even if it wasn’t a fun hour or two. However successful you get, you always need to be challenged or you’ll end up phoning novels in.

Moon’s Artifice is out TODAY! Go on. Go buy it. Here’s the synopsis

In a quiet corner of the Imperial City, Investigator Narin discovers the result of his first potentially lethal mistake. Minutes later he makes a second.

After an unremarkable career Narin finally has the chance of promotion to the hallowed ranks of the Lawbringers – guardians of the Emperor’s laws and bastions for justice in a world of brutal expediency. Joining that honoured body would be the culmination of a lifelong dream, but it couldn’t possibly have come at a worse time. A chance encounter drags Narin into a plot of gods and monsters, spies and assassins, accompanied by a grief-stricken young woman, an old man haunted by the ghosts of his past and an assassin with no past.

On the cusp of an industrial age that threatens the warrior caste’s rule, the Empire of a Hundred Houses awaits civil war between noble factions. Centuries of conquest has made the empire a brittle and bloated monster; constrained by tradition and crying out for change. To save his own life and those of untold thousands Narin must understand the key to it all – Moon’s Artifice, the poison that could destroy an empire.

Also, while you’re at it, The Twilight Reign novels are all now available, published by Gollancz in the UK, and Pyr in the US.