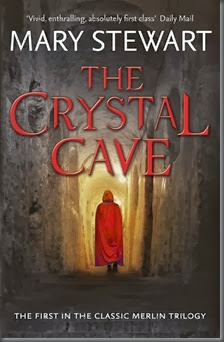 One of the best-loved interpretations of the Merlin Myth

Fifth century Britain is a country of chaos and division after the Roman withdrawal. This is the world of young Merlin, the illegitimate child of a South Wales princess who will not reveal to her son his father’s true identity. Yet Merlin is an extraordinary child, aware at the earliest age that he possesses a great natural gift – the Sight.

Against a background of invasion and imprisonment, wars and conquest, Merlin emerges into manhood, and accepts his dramatic role in the New Beginning – the coming of King Arthur.

Hm. How to review a book that is well-written, well-conceived, but didn’t fire one’s imagination? In brief, I suppose, is the best answer. I received this as part of the Hodderscape Review Project, which has been a great way to try out some classics of genre fiction. True, only one has truly wormed its way into my mind (Stephen King’s The Shining), but I am very happy that I’ve had the opportunity to read these books (this is the third so far). I’m especially looking forward to the next title in the project (by none other than Ursula le Guin…). The Crystal Cave, however, must also be put on the Shelf of Classics That Disappointed.

Despite this, there is a fair bit to like in this novel. Stewart’s prose is well-crafted and fluid – it reminded me of Robin Hobb’s Assassin’s Apprentice, actually, in style. The characters are interestingly portrayed and well-drawn. Despite these things, the story itself just didn’t grab me enough to make me love it. This is one of the first novels that, after I told friends and family that I was going to read it, was universally met with comments along the line of, “It’s great!” and “It’s fantastic!” Sadly, I just didn’t get swept up by it. The story took too long to get going. I did, however, enjoy how Stewart brought in Merlin’s gift of Sight into the story, and developed it over the course of this first book – he first comes across as incredibly observant, and then we start to see his knowledge of things he couldn’t possible know.

As far as Merlin/Arthur interpretations go, I can certainly see why this has been so popular, and how that popularity endures today. Of the many other versions of this story that I have read (most recently, I think, DC Comics’ Demon Knights and Maurice Broaddus’s Knights of the Breton Court), this is probably the best conceived and in-depth.

It is perhaps the long-game approach that Stewart took that makes the novel not really work for me. It suffers from being too obviously the first part of a series – the characters, ideas and so forth aren’t developed enough, and I didn’t think the plot moved forward enough. Sadly, this means I haven’t got the bug to seek out the rest of the series. At least, I am not in any hurry. As someone who will happily sit through thousands of pages of epic fantasy trilogies (most recently, Joe Abercrombie and Peter V. Brett – both authors for whom I had some catching up to do), it is perhaps strange to say this book didn’t work for me.

That’s quite possibly the most carefully-written, sitting-on-the-fence review I’ve ever written. I’m not proud of it. I just couldn’t rustle up much verve to dig deeper. Which is never a good sign when it comes to a novel. I’m sure, in the future, I’ll give this another try. As it stands, though, it didn’t work for me, and I don’t want to belabour the point.