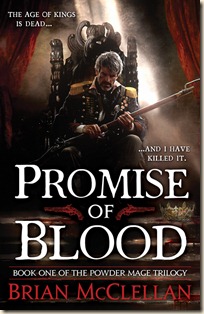 One of 2013’s most Hotly-Tipped Fantasy Debuts

“The Age of Kings is dead. And I have killed it.”

Field Marshal Tamas’s coup against his king sends corrupt aristocrats to the guillotine and brings bread to the starving. But it also provokes war in the Nine Nations, internal attacks by royalist fanatics and greedy scrambling for money and power by Tamas’s supposed allies: the Church, workers’ unions and mercenary forces.

Stretched to his limit, Tamas relies heavily on his few remaining powder mages, including the embittered Taniel, a brilliant marksman who also happens to be Tamas’s estranged son, and Adamat, a retired police inspector whose loyalty will be tested to its limit.

Now, amid the chaos, a whispered rumour is spreading. A rumour about omens of death and destruction. Just old peasant legends about the gods returning to walk the earth. No modern educated man believes that sort of thing...

But perhaps they should.

I’ve been looking forward to this novel for a good long while. When I was finally able to get my mitts on a copy, I tore into it, and blitzed through it far quicker than I normally do for a 500+ page novel. Bottom line, while there are a few niggles, Promise of Blood is a lot of fun, and the start of something potentially fantastic.

The novel has three main character perspectives, through which we learn basically everything we need. And that, actually is something I’ll deal with quickly: we get a lot of information, world-building, history and so forth. There is a near-blizzard of new names and terms near the start, but McClellan has done a good job of working them into the story appropriately. That being said, “Centestershire” made me grumble…

The first main character is that old fella on the cover: Field Marshall Tamas. In his 60s, he is the leader of the army and also the mastermind of the coup to topple King Manhouch. He struggles a bit with the demands of leadership. Enormity of the coup weighs heavy on him. Over the course of the novel he will have to face multiple attempts on his life, nefarious Privileged (mages) with truly evil ways of dampening a Powder Mage’s abilities, and plots within plots. Oh, and someone who could be a god…

An old acquaintance of Tamas, investigator Adamat is called in by the Field Marshall to look in to the peculiar mystery that was stirred up by the last words of the Royal Cabal of Privileged. He heads out to learn what he can, but quickly discovers someone has been systematically destroying references to the mysterious “Kresimir’s Promise”. On top of that, and further adding to his problems, he’s in debt to some unsavoury people. People who are entirely comfortable with exerting pressure in sensitive physical and psychological places…

“Did you do this for power?”

“I did this for me,” Tamas said. “And I did this for Adro. So that Manhouch wouldn’t sign us all into slavery to the Kez with the Accords. I did it because those grumbling students of philosophy at the university only play at rebellion. The age of kings is dead, Adamat, and I have killed it.”

And finally, we have Taniel, Tamas’s son. Like his father and ex-betrothed, Taniel is a Powder Mage. I suppose I should mention that I really like this idea – people with ballistic powers based around (you guessed it) the use of gunpowder. It gives them heightened senses, pyro- and tele-kinetic powers (of sorts), and can be generally total badasses in combat. (Just wait until the Field Marshall unleashes his abilities… Whoa.)

Tamas reached out mentally and absorbed the power of the powder blast. He felt the energy course through him, warming his body like a sip of fine spirits. He redirected the power of the blast harmlessly into the floor, cracking a marble tile beneath the king.

Taniel is tasked with hunting down a Privileged who escaped the coup, and stamp out the King’s Royal Cabal once and for all. He accepts the job, if for not other reason than to create more distance between him and his ex-fiancée, Vlora, who is seconded to Tamas’s command. Through his investigation, we see how devastating and destructive battle between two Privileged can be (scenes at the university), and also learn a little more of the world. Like Adamat, his investigation will take him to some far-flung regions of the world McClellan has created.

The story and prose flow very nicely, and I easily sank in to the narrative each time I picked it up (real world commitments precluded me from devouring it in a couple of long, leisurely sittings). The pacing is superb, and I enjoyed hanging out with the characters. I particularly liked Taniel’s “Savage” companion, who is all manner of awesome (and really comes into her own in the second half of the novel). There were a couple of chronological jumps, though, of a week or month, which took me a bit by surprise. Maybe a sign of trying to cram too much into the opening book? I don’t think it really has much of a negative impact on how much I enjoyed the novel, but I did have to pause a couple of times to reorient myself.

I can see Promise of Blood being very popular. There’s a lot of great world-building, and it will certainly be interesting to see more of it unveiled in future books in the series. There are a handful of interesting characters, with three pretty strong key cast members. Their supporting allies, antagonists, and companions are all interesting as well. I do think, though, that book two perhaps needs to expand the core cast a little bit more, adding a bit more variation in the points of view? The plot is good, and fast-paced (if a smidge busy at times), and gripping. It is well-crafted, but I think it could have done with a few tweaks and tucks here and there.

Overall, this is a satisfying and promising start to a new series. There are a lot of things readers will expect from a debut and the first part of a new series: pieces are still maneuvering on the board, conspiracies are revealed, secrets hinted at and unveiled, and more.

I had a lot of fun reading this – there are some interesting surprises, characters are not sacred to McClellan (lots of sudden deaths), some riveting and blockbuster-esque action scenes, and a satisfying conclusion that leaves things wide open for book two, The Crimson Campaign. I think McClellan’s going to have a successful career as an author, and the more he writes, the more impressive his novels will become. If you’re looking for a fun, original and engrossing new fantasy series, then I would certainly recommend this.

Also on CR: Guest posts by Brian – “My Favourite Novel” and “Protagonist Ages in Epic Fantasy”

Extras: Two Maps of the World, and the cover for book two, out next year from Orbit Books… 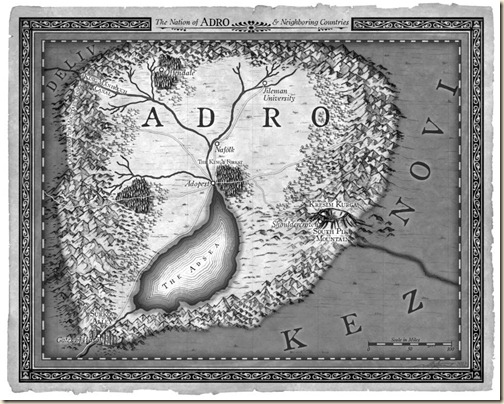 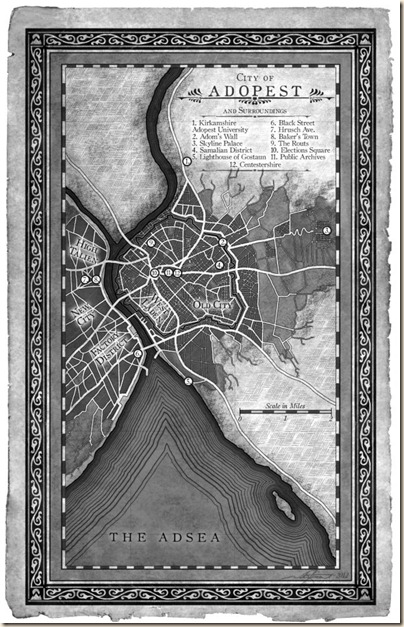 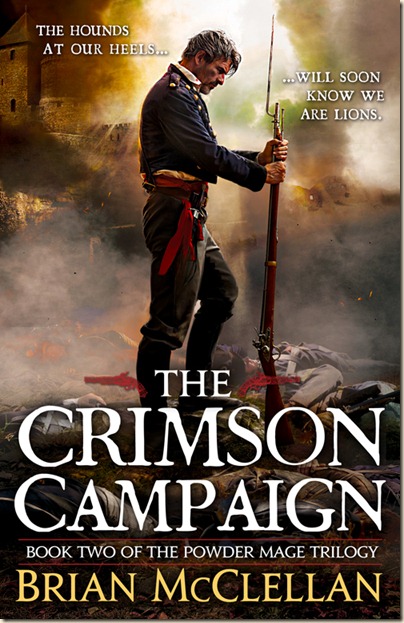