The Saga of the Skywalkers continues, and once again the future of the Galaxy hangs in the balance… 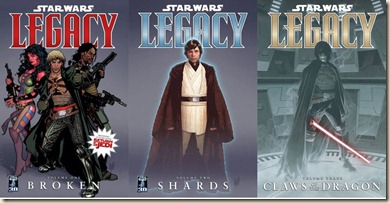 Broken: The Jedi Temple is attacked, and a hero falls; an Emperor is betrayed, but perseveres; and the Sith are born anew, in greater number and deadlier…

Shards: Cade Skywalker returns to the place of his father's last stand against the Sith and finds far more than ghosts… The story of how the Empire joined forces with the Sith to defeat the Galactic Alliance, only to have Darth Krayt and his legion of followers usurp ultimate power for themselves. Follow the fate of an Empire divided, with battles pitting stormtrooper against stormtrooper, and Sith assassins bent on taking the life of deposed Emperor Roan Fel.

Claws of the Dragon: Cade Skywalker is captured by the Sith. Emperor Darth Krayt unveils his true identity, and a secret chapter in the life of Obi-Wan Kenobi is revealed. When Cade attempts to rescue the Jedi he turned over to the Sith during his days as a bounty hunter, the last Skywalker soon finds himself in the clutches of Krayt. There, Cade must confront his past and decide once and for all: will he remain the Emperor’s prisoner or become his thrall? Learn whether the Skywalker line lives up to the triumph of Luke or returns to the tragedy of Anakin…

I’ve been tempted by this series of graphic novels for quite some time. When I finally managed to get hold of the first book, Broken, I read it pretty fast. Ostander’s writing is good, the plot rattles along at a fair clip, and for the most part, the artwork is pretty great (there are the occasional bits where the style is not my preferred, but it still does the trick). Brilliantly bringing to life the future of the Star Wars Universe, Legacy adds some more layers to the Skywalker clan mythos. There are plenty of references to events of the films and novels, and plenty of homages in the form of snippets of dialogue that could have been transposed straight from the movies.

Cade Skywalker, the last in the line, is very different from what one might expect. Closer to Han Solo than Luke, he is brash, roguish and a scoundrel. Darth Krayt, the antagonist of the series, is a good foil for Cade and the other ‘good-guys’ of the piece. As the three books progress, we get more information and back-story about Krayt, further developing the history of the universe. Being far more familiar with the novels than comic series, I can’t help thinking that I’m missing something, on occasion, when a reference passes me by completely or a seemingly popular or recurring character appears for the first time (for me). The inclusion of the Yuuzhan Vong is good, as we get more story about how they were integrated into the galaxy after the events of the New Jedi Order series. 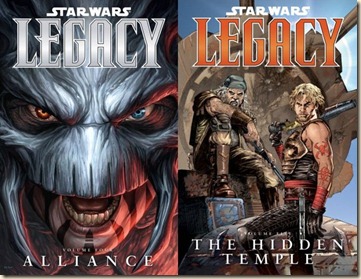 Alliance: Seven years ago, Admiral Gar Stazi and his Galactic Alliance fleet barely escaped an Imperial trap. Now he has a chance to turn the tables on the Darth Krayt and his Empire. But the stakes are high. Not only must Stazi risk every ship of his battle-worn fleet, but he must depend upon his more powerful enemy to remain blind to his true objective.

The Hidden Temple: Cade Skywalker has escaped the clutches of Darth Krayt and imprisonment in the Sith Temple. He has faced the teachings of the Dark Side and returned to his friends with new knowledge and a few secrets as well. Cade says he desires only what it is he truly values, and what he must do to maintain it. This reluctant heir to the Skywalker legacy could end up a hero whether he likes it or not.

Alliance starts without a word of Cade Skywalker and his band of merry henchmen. This, for me, was somewhat disappointing, as Claws of the Dragon was very focussed on his experiences in the custody of Darth Krayt. To abandon this storyline wholesale for an entire volume was not the best move in my mind, although I will concede that the back-story for General Stazi added another layer to the overall background of Legacy. An ok storyline, but not the most gripping, and I started to worry that maybe the series was already starting to peter out, to lose focus. The final part of the book is set after the events of volume five, which was a bit of a peculiar move, but as it added more to Darth Wyyrlok’s story, I thought it was a welcome addition to this otherwise sub-par volume (there’s some interesting development of the Dark Side and Sith history, too).

The Hidden Temple, thankfully, returned attention to Cade and his merry band of bounty hunters and vagabonds. We learn a little more of Cade’s extended family, as well as the increasingly complex loyalties that are developing between the Sith and those they recruit to hunt Cade. Some background is added to Sia’s distinct dislike for Jedi, and the Imperial Knights return for a little more arrogance and meddling. The book finishes a little suddenly, without really having achieved anything, though Cade’s proposal at the end (to assassinate Darth Krayt) could have been made more of – completely new approach for the Jedi.

Overall, though, I enjoyed these five books. The artwork wasn’t consistently great, and at times the story was a little flat (the reliance on reproducing dialogue from the movies – while no doubt intended as an homage – comes across a bit lazy, rather than fanboy).

If you’re a fan of the Star Wars movies and/or novels, and want something a little lighter and quicker, then the Legacy series of comics is perfect. If you’re familiar with the novels, as I am, you might not find this as fulfilling – by its very nature, character development is not as good as can be achieved in a 300+ page novel. (This might explain why I’m now reading Christie Golden’s Allies, which is proving better than expected.)

Reading these graphic novels has been an entertaining and interesting detour from my usual preference for novels, and I will be finishing off the series (slowly) as time goes on. I’m still not convinced I’m going about the reviews in the right way, so I might have to do a little more research before I post too many more like this.

The next volume is the final book of the era-spanning Vector series (which I already own), which I’ll try to get reviewed later this week.