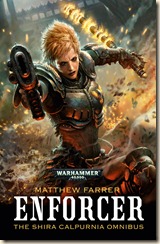 The Adeptus Arbites are responsible for enforcing Imperial Law across the Imperium. Enforcer Shira Calpurnia is a newly assigned officer to the Hydraphur division, charged with maintaining a tough line on law and order in the system. Home to Imperial warfleets which dock, rearm and repair in a neverending cycle of conflict, in this violent and corrupt sector of space. Calpurnia's duty is to protect the innocent and punish the guilty… With extreme prejudice.

Crossfire: Calpurnia is a newly-appointed Arbites officer. But she soon finds herself investigating a series of assassination attempts at the dockyards. With so much at stake, she must unravel a mystery that goes to the heart of Hydraphur’s elite.

Legacy: Calpurnia is appointed to protect an ancient trading charter; a document highly-prized by a number of potential heirs willing to go to any lengths to obtain it. Calpurnia and her fellow Arbites must don their armour and fight, to ensure the charter ends up in its rightful place.

Blind: When a telepath is killed, Calpurnia faces suspicion and mistrust from his disturbed fellows, as her investigation takes her deep into a deadly conspiracy. In a hostile environment, and dogged by her new ‘minder’, can she solve her most difficult case yet and ensure Imperial law is restored?

Collecting Farrer’s three Calpurnia novels, along with a new introduction and ‘dossiers’ for each novel, Enforcer is a excellently-priced omnibus. I read these three novels when they first came out, so it was nice to re-visit the series.

Different from Black Library’s usual output, the novels are more crime investigations in a gothic sci-fi setting than proper tales of war and fierce battles. Some might find the pacing a little slow (even I did at times), or the premise not what they were expecting or to their taste, but I really welcomed the different approach to the Warhammer 40,000 universe. Shira Calpurnia is an interesting, strong (if short) lead character, and one you will grow closer to as the novels unfold – we only really get to know her slowly, as Farrer reveals her background at a leisurely pace. With the Adeptus Arbites (the police force of the Imperium) as the central focus of the novels, we are taken away from the front lines of battle, and brought into the cities of the Imperium and all the intrigue, politicking and plotting that typifies life within them. It made a nice change, one that Dan Abnett’s Eisenhorn and Ravenor series also provided. The added information about how the Imperium works was, for me, a big draw.

The greatest strength of the novels, however, is that they were the first to really delve into how the Imperium actually worked, rather than just how it made war. Crossfire is particularly strong; more about human nature and its failings than inter-species, intergalactic war, well suited to introducing us to the Imperium and how day-to-day society works within it. Legacy is also good, giving us more information and background on the Rogue Traders and how their strata of society works – some have complained that Calpurnia didn’t feature enough in this novel, which is a fair complaint, but ultimately there was enough intrigue and dynastic politics to keep it interesting. Blind is a little different, adding to our understanding of the lives and operations of the blind psykers, the astropaths, with a more interesting antagonist and premise – to add to her problems, Calpurnia is also awaiting trial for a misstep, postponed so she can help solve the murder of a psyker.

Farrer’s prose are well-crafted, and the plots unravel at a good pace, always giving us just enough to draw us along, and he is adept at bringing the worlds and Imperial citizens (loyal or otherwise) to life, as well as describing the lives of the multiple strata of Imperial society.

Even though I enjoyed these novels, I must admit that if I had to choose something in the 40k setting, I would probably still opt for anything by Abnett, Graham McNeill or something in the Horus Heresy series. It’s not that Enforcer isn’t worth reading, it’s just not what many people will want from a 40k novel. The dossiers included for each novel are a pretty nifty inclusion, offering something more to enhance the novel you’ve just read. The most recent novels from the Black Library that have the most similar feel to these are Sandy Mitchell’s Inquisitor novels, Scourge the Heretic and Innocence Proves Nothing.

Enforcer is recommended to anyone who loves the setting, but wants something a little different while still identifiable as Warhammer 40k. That being said, Farrer writes some good sci-fi here, so even if you’re not familiar with the universe, or haven’t read anything from Black Library, then this could be an interesting introduction.

(As with all Black Library omnibuses, Enforcer is also priced very well – three novels, with bonus content, for just £11? Bargain.) 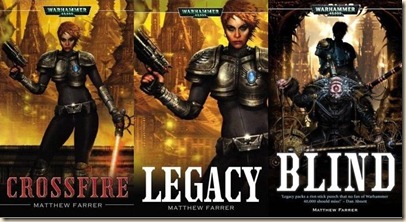 Posted by Civilian Reader at 9:49 PM