“A Princess of Landover”, by Terry Brooks (Orbit) 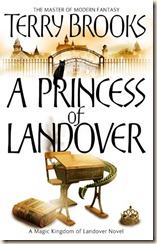 Brooks returns to his lighter fantasy series, with mixed results

Princess Mistaya Holiday hasn’t been fitting in too well at Carrington Women’s Preparatory. People don’t seem to appreciate her using her magic to settle matters in the human world. So when she summons a dragon to teach a lesson to the snotty school bully, she finds herself suspended.

But Mistaya couldn’t care less – she wants nothing more than to continue her studies under Questor the court magician, and Abernathy the court scribe. However, her father Ben Holiday, the King of Landover, has rather different plans in mind for her. He thinks he’ll teach her about perseverance and compromise by sending her to renovate Libiris, the long-abandoned royal library. How horribly dull.

But before long, Mistaya will long for the boredom of cataloguing an unfeasible number of derelict books – for deep within the library there lies a secret so dangerous that it threatens the future of Landover itself...

As a big fan of Terry Brooks’ Shannara saga and The Word and the Void, I loved the previous books in the Magic Kingdom series, and have been eagerly looking forward to the next instalment.

The story joins Mistaya, daughter of former lawyer, and current King of Landover, Ben Holiday and Willow the wood nymph, as she reaches fifteen and is trying to find her own place in both the human world of her father and the magical kingdom of her birth.  Over the course of some very human teenage rebellion she encounters new friends and enemies, and has the support of many familiar faces along the way.

Not as dark as other books by Brooks, this novel is a fun read, and anyone who enjoyed the previous novels should enjoy revisiting the Magic Kingdom of Landover. However, the overall feel was that of a “filler” novel, one that was written to pave the way for a later story the author had in mind, but had to close some gaps first to get there.

It was not a total disappointment, by any means, but it lacked the richness of detail and background we have grown accustomed to, and the ending felt a bit too easy compared to others in the series.

I can only hope that I am right, and that this will be followed by the kind of epic adventure we have come to expect from the very talented Mr. Brooks.

Posted by Civilian Reader at 12:22 PM