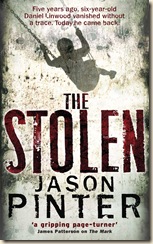 A kidnapped child returns home suddenly, and journalist Henry Parker is on the case

One day five years ago, Daniel Linwood disappeared. When he reappears, with no memory of those lost five years, he come under intense scrutiny from the media. Henry Parker, a reporter at the New York Gazette, is assigned to the story, by request of the boy’s family. Parker sets out to understand what has happened to the boy. Moving beyond the human-interest angle of the piece, he soon discovers that Danny is not unique, and that a string of children who were abducted have been returned to their families, all with the same amnesia of the years they were missing.

Along with intense, hostile scrutiny from the media establishment, Parker must tread carefully and navigate around the strange (and highly suspicious) opposition to him pursuing the wider story from the extremely-tough-on-crime New York Senator, Gray Talbot, who threatens to prosecute Henry and the Gazette if they take their investigation any further. This, coupled with a warning from his editor, naturally only heightens Parker’s desire to get to the bottom of the story, and find out what’s happening to these kids and where they’re being taken. With help from Amanda, a Legal Aid lawyer and his ex-girlfriend, he slowly pieces together the story.

Pinter’s writing and plotting continues to get better with each novel, and his protagonist grows ever-more mature and worldly as the series progresses. He is more comfortable in his job, a little jaded yet retaining the hunger and idealism of a newbie reporter. The novel details more of this life in New York, perhaps mirroring the author’s own experiences, with a bit of social commentary to add flavour and depth to the story.

The pace of the novel is slower to get started than The Mark and The Guilty, which really rattled along at a breakneck pace – though it does pick up considerably about half-way through. It seems that for this novel, Pinter felt more confident in his writing to allow the novel to unfold at its own pace, dwelling more on setting the scene and character development.

Pinter’s characters continue to be interesting to read about. While there are some standard thriller tropes the author makes use of (difficult childhoods, estranged parents, etc.), the characterisation still feels fresh and special. Henry, in particular, is a great ‘hero’, with his mix of idealism and naïveté, his tenacious desire to help the needy and so forth. It sounds clichéd and unoriginal, but Pinter has really created some very endearing characters, which makes this series so engaging and readable. One great character is Jack O’Donnell, the polar opposite of Henry: he is a hard-boiled, whisky-soaked, aging journo full of cynicism and combativeness, and works well in the story as a foil to Henry’s idealism, as he tries to make the younger reporter a bit tougher, steering him through the troubled waters of the craft.

Overall, this is an excellent thriller, with an interesting and realistic protagonist, and an engaging plot. The Stolen is good fun, gripping, and very well written.

An excellent addition to the series and genre as a whole, The Stolen is highly recommended (along with the rest of the series).