“Lost Tribe of the Sith #1: Precipice”, by John Jackson Miller 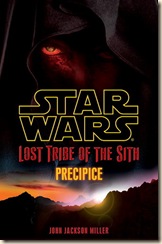 Precipice, a short eBook novella, lays some of the background for the second book in the Fate of the Jedi series, Omen (reviewed below). It opens with the Sith Empire ship, Omen, on a collision course with an unknown planet, having ejected abruptly from hyperspace. The Commander of the ship, Yaru Korsin, and his crew are left stranded, with few supplies. Tension mounts and the crew quickly devolve into a tribal state (imagine Lord of the Flies, but with lightsabers…), and Korsin must exert his authority in brutal fashion, following a failed coup. It’s not immediately apparent how these events will be tied into the upcoming novel, but for such a short story (50 pages or so), it was certainly gripping and expertly executed.

It’s clear that this is the first in perhaps a series of eBook novellas, which bodes well for the reader: in this short space, Miller has introduced us to an engaging cast with a lot of potential – Seelah, Korsin’s brother Devore’s “woman” (as Sith, there’s no love between them), Ravilan (a Red Sith), and especially Korsin (who is aided by his Force-blind ally, Gloyd)

You can download the story (legally and free), here, and it is also available for the Kindle and Sony eReader.

John Jackson Miller has also published an interesting, short essay discussing the short story and how he approached the task of writing it, here.