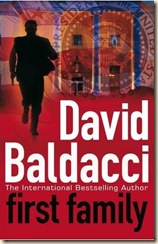 With the President’s niece kidnapped, King and Maxwell are called in to investigate

David Baldacci exploded onto the thriller scene with Absolute Power (1997), which was later made into a movie starring Clint Eastwood. Not since Absolute Power, however, has Baldacci taken us back into the lives of those who live in the White House.

In First Family, the President Dan Cox’s niece is kidnapped after her twelfth birthday party and her mother murdered. First Lady Jane Cox, who has some history with Sean King from his Secret Service days, employs him to find her niece, Willa. Sean King and his partner Michelle Maxwell (the stars of three previous novels by Baldacci) embark on a convoluted case, disrupted by family tragedies, Washington politics, and a truly ingenious plot that has been years in the making.

Baldacci’s novels continue to enthrall readers the world over (his novels are available in 40 languages in more than 80 countries), and First Family will not disappoint his fans. The plot moves along a little slower than normal (though this didn’t stop me devouring it in two days), with the events concerning Michelle’s family something of a distraction. Maxwell has always been a pretty broken character, struggling with her personal demons, and in First Family we get to see what it is that she’s buried in her subconscious from so many years ago. All of Baldacci’s characters – whether minor bit-players or our heroes – are well-rounded and believable, and in First Family, he’s done an exceptional job of rounding out Maxwell and King, their relationship and those they interact with throughout the novel.

The main case, that of Willa’s kidnapping, is an excellent story, and one that unwinds slowly as the novel progresses and Sean and Michelle tease out facts and clues to help save Willa. The case takes them through the politics of government contracts to the deep South and a historic plantation house filled with secrets. Sam Quarry, the novel’s antagonist, is an exceptionally well-rounded character, and one I ended up caring about far more than I did for the First Couple (or perhaps any other character in a long while).

Expertly written and an engaging and exciting plot: What more could we ask for? Baldacci remains one of the best writers in the business.