“Lost Tribe of the Sith #2: Skyborn”, by John Jackson Miller 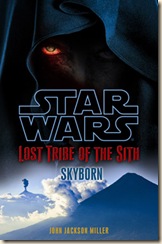 The Lost Tribe venture forth to conquer

The story of the Lost Tribe continues: the survivors of the Sith ship Omen are consolidating their settlement and hold on their new home-world, as they venture forth to subjugate and conquer the Keshiri locals.

Superstitious and anti-technology, the Keshiri are strict and draconian about their faith in their Skyborn gods. When Adari Vaal, a geologist recently branded a heretic by her fellow Keshiri, finds sanctuary among the marooned Sith, Yaru Korsin sees an opportunity to infiltrate Keshiri society, using the myths of the Skyborn to his advantage. Utilising the awesome power of the Dark Side, Korsin sets in motion his plan to conquer the locals and lay the foundations of a new nation; one ruled, of course, by the merciless Sith.

Told from the perspective of Adari, Skyborn was an interesting novella, as it provided an account of a society being thrust into contact with the Sith and what it might be like to experience such a complex and intense group of creatures. Adari’s character is appealing and fun to read about, from her impish rebellion against Keshiri religion and social mores, to her curiosity about the Sith and the politics she learns to play while in contact with them. It would have been more interesting and perhaps more satisfying to have another novella from the perspective of Korsin and the rest of the Sith, but without knowing how this story is going to end, it’s difficult to know for sure how the events in Skyborn will be used – both in this series of eBooks and most importantly in the Fate of the Jedi series.

The Lost Tribe of the Sith eBooks are an excellent addition to the Star Wars canon, adding detail and understanding of the ancient Sith order and how they operated, before Darth Bane began the Rule of Two (discussed and explained in Drew Karpyhyn’s series). Adding more detail to the back-story that is slowly unfolding in the Fate of the Jedi series, both Precipice and Skyborn are entertaining, interesting novellas that add more colour and depth to the overall Star Wars universe and cannon.

Posted by Civilian Reader at 12:44 AM