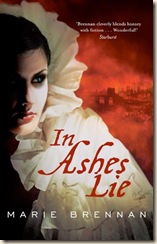 In London, King and Parliament vie for power. In the faery realm, below, a similar conflict rages. Lune has gained a kingdom, but struggles to keep it. The powerful faerie Nicneven schemes from afar, and closer to home spies have infiltrated Lune’s Onyx Court.

Meanwhile, in a humble bakery on London’s Pudding Lane, a spark ignites the sleeping city, and forces all – aristocrats and commoners, Roundhead and Cavalier, human and fae – to join forces to save their home from burning annihilation.

The sequel to the haunting Midnight Never Come, this novel follows the early years of Lune’s rule as she tries to consolidate her power. Elizabeth I is dead, along with Invidiana, her dark counterpart in the faery court. But Invidiana’s influence still reverberates through the Onyx Court, and Lune’s position is precarious.

In the same way as Midnight Never Come, Brennan interweaves fact and fiction to create a faery world grounded in historical London. This history forms the framework of the series, shifting between two main periods of 1639-1642 and 1666.

Brennan’s grasp of the historical detail and time-shifting plot is admirable. However, I did sometimes find the constant time-shifts hard to keep track of. In each period, Lune is supported by a mortal, chosen as her ‘Prince of the Stone’, her link to mortal London – this device is quite useful, as the different prince in each period does make it easier to follow.

The mirroring of human London in the faery court is clever and the author has an original take on faery ‘lore’, creating a world that is unique and fresh. Brennan’s characters are complex and appealing – in particular Lune herself, who struggles with the challenge of ruling the Onyx Court and navigating the faery politics. Torn between the need to crush those who would seek to question or usurp her authority, and the fear of becoming like the tyrant Invidiana, Lune’s perspective is an interesting one through which to see this world. The Goodmeade sisters are particularly intriguing characters, as they run a faery inn (located beneath a rose bush in the garden of a human inn), and hold uncommon influence in the faery realm, as they offer sanctuary and advice to those in need.

Brennan’s prose is eloquent, and her plot is full of twists and turns. In Ashes Lie is driven more by historical events than the character-led plot of Midnight Never Come. Because Brennan is dealing with such a wealth of history and momentous events in one of London’s most turbulent periods, it was clearly an ambitious project to take on. She has succeeded for the most part, though the event-driven plot is less fulfilling than the character focus of the first volume of the series.

As a stand-alone, this novel doesn’t quite work – there is just too much going on for someone to just dive straight in. For those who have read Midnight Never Come (which was exceptional), however, this should not be a problem as you will already be acquainted with some of the characters. Needless to say, I would recommend In Ashes Lie to those who like their fiction and fantasy grounded in history, and populated by well-rounded and complex characters and a good amount of intrigue.