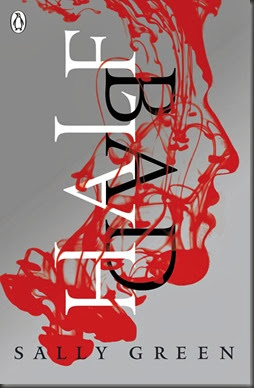 I just spotted this via an advert on Goodreads (well-played, Google Ad Algorithm, well-played…). The cover really caught my eye, and I thought I’d share it on here. It’s pretty cool, no? I particularly like the way the blood in the water has been shaped (in a surprisingly realistic way) into a face, in an otherwise minimalist image.

The premise is pretty interesting, but I have a suspicion that it’s perhaps a little reminiscent of something else… If only I could remember what it reminds me of… Anyway. Here’s the synopsis:

One boy’s struggle for survival in a hidden society of witches.

Half Bad will be published by Penguin UK in March 2014. Penguin are also publishing in the US and Canada. It is Sally Green’s debut novel, and the first in a projected trilogy. The author is also on Twitter. Described as “supernatural thriller set in a modern world inhabited by covert witches”, I am pretty sure there are going to be a lot of people interested in reading this. Despite the obvious Harry Potter parallels (justified or not, as they may end up being). There’s a slightly different synopsis on the book’s website:

Sixteen-year-old Nathan lives in a cage: beaten, shackled like a dog, trained to kill. In a modern-day England where two warring factions of witches live amongst humans, Nathan is an abomination, the illegitimate son of the world's most terrifying and violent witch, Marcus. Nathan’s only hope for survival is to escape his captors, track down Marcus, and receive the three gifts that will bring him into his own magical powers — before it's too late. But how can Nathan find his father when his every action is tracked, when there is no one safe to trust, not even family, not even the girl he loves?

I did some Googling, and it turns out that the rights to this novel have already been sold in 25 foreign rights deals. Within 13 weeks of Penguin’s first acquisition. Holy crap, that’s impressive. The Bookseller rightly (perhaps rather tamely) referred to the deal as “unprecedented”. No idea how much it went for in the first place – in secret-publishing-deal-speak, the deal was only referred to as “substantial”. This sort of deal is pretty unusual, so yeah. I’m a bit more intrigued…

Posted by Civilian Reader at 9:21 PM