Mini-Review: “A Time to Kill” by John Grisham (Arrow) 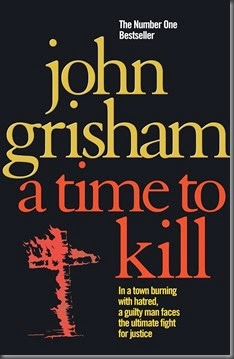 When Carl Lee Hailey guns down the monsters who have raped his ten-year-old child, the people of Clanton see it as a crime of blood and call for his acquittal.

But when extremists outside Clanton hear that a black man has killed two white men, they invade the town, determined to destroy anything and anyone that opposes their sense of justice.

The story of Grisham giving away millions of dollars’ worth of A Time to Kill first editions is pretty well-known, now. After his first publisher went bankrupt, Grisham had to buy 1,000 copies of the 5,000 print run. Here’s what he told Newsweek:

“I took all the books down to the local library and we had a big book party. When the party was over, I still owned 882 copies… so I started giving books away. We took them back to my office and packed them in the reception area. The boxes were everywhere, and I would just give them away. If one of my clients wanted a book, I’d try to sell it. If not, I’d give it away. I’d sell them for 10 bucks, five bucks. I used them for doorstops. I couldn’t get rid of these books… These 5,000 books were the only first editions of A Time to Kill. That book today is worth about $4,000. I had 1,500 of them in my law office at one time. So that’s my big mistake — that’s about $6 million, the way I do the math.”

When I re-read A Time To Kill recently, I found it rather tricky. I’m a huge fan of Grisham’s novels, and have read them all – only two haven’t hit the mark for me (The Street Lawyer and, sadly, this one). But this one just didn’t have the skill and addictive quality of his later work. Mainly, that boils down to the way in which it was written, rather than the story itself, which is pretty great.

Put simply: it’s not as polished as the novels that came afterwards. Sure, it’s a great story and premise, and it is – for the most part – well structured. However. The novel is nevertheless over-written and the content shows a distinct lack of authorial and editorial restraint. Grisham, and his characters, describe and explain everything. One sees only the early signs of the master storyteller he would become. There are plenty of tangents that aren’t quite as well incorporated to the main narrative as it perhaps could have been. They also often felt longer than was necessary. Despite this niggle, though, I kept reading.

One thing I do want to point out, and a major plus, is that Grisham doesn’t pull any punches. His characters are well-developed, diverse, and each of them is a mix of good and bad traits. I can’t really comment on how True To Its Times it is, as I only six when this was first published. But the community and society are presented in a pretty open-eyed manner. The racism, divisions, mores are laid bare for the reader. The characters are what make the novel, though. The story, if the writing had been a little more polished and restrained, would have been superb – perhaps why it worked so well as a movie?

I’m certainly interested to see how Sycamore Row turned out (I have it on my Kindle already, just need to read it): the same main character, combined with his years of experience and authorial improvement? It could be a stunning thriller. I think I’ll have to move it up the TBR mountain. Grisham fans will enjoy it, but I’m not sure they’ll like this as much as his later novels (or, really, immediately following novels…).