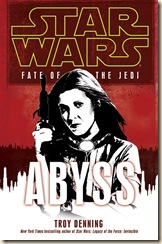 Part Three of the Fate of the Jedi sequence

The search to understand Jacen’s slide into the Dark Side continues, as Luke and Ben Skywalker journey deep into the Maw – a deadly cluster of black holes, in the centre of which a powerful evil has taken refuge; it is enormously strong and has its own special plans for Luke Skywalker. Father and son are not alone in their quest, however, as a Sith Master and her apprentice (along with a ship-load of Sith warriors) have been tracking “Ship”, a Sith meditation sphere, as well as the Skywalkers, intent on killing the Jedi and recovering the sphere.

Meanwhile, back on Coruscant, the mysterious illness afflicting young Jedi continues to confound Leia, Han and the Jedi medical teams. Leads emerge, perhaps linking the illness to Shelter, the hidden base where young Jedi were protected during the recent galactic civil war (detailed in the events of the Legacy of the Force series), which was located in the Maw. While struggling to find a cure, our heroes (aided by Jagged Fel, the Chief of State of the Imperial Remnant) must also navigate Coruscant politics and the devious maneuvering of Galactic Alliance Chief of State Natasi Daala, who remains intent on bringing the Jedi Order to heel. On top of this, a particularly unscrupulous and determined journalist has been shadowing Jedi, broadcasting every fault and slip.

Troy Denning is certainly one of the better authors working on the Star Wars series (and we can therefore forgive his tendency to come up with awful ‘futuristic’ swear-words), and Abyss lived up to my expectations in terms of the quality of the writing – in fact, slightly exceeding them. The novel takes a slightly darker turn, as Luke and Ben are confronted with some decidedly twisted, utterly alien and horrific things while in the Maw.

The thread involving the Jedi-sickness is finally linked with Luke and Ben’s journey, which will be of interest to those who thought it was becoming a little repetitive and aimless (after only two books); there are only so many times you can read that another Jedi has been struck demented, with no cure in sight, before it starts to look like a pointless plot device to keep Han and Leia in the story. This plot-thread does remain the weaker part of the series, it must be said (see later, though).

The increased attention given to Vestara and her Sith leaders and comrades is welcome, as we learn more about the Lost Tribe of the Sith and their motivations (introduced in the eBook novella series of the same name, reviewed here and here) – one thing that comes across here is that, if the Sith weren’t so intent on their personal Machiavellian politics, they might get a bit more conquering and subjugating done, instead of expending so much energy on bickering and infighting.

Denning’s prose are fluid and tightly-written, the plotting is very fast-paced (I read this book very quickly indeed), with a healthy balance between action, occasional wit, and ever-more detail of the Star Wars universe and those who inhabit it. I would have preferred if the plot and series as a whole were more focused on Luke and Ben’s journey, as I believe all three writers for this series have managed to create and maintain an interesting dynamic between father and son hitherto unexplored in much detail. It’s clear that Ben is going to be a major (if not the major) character in the future, so it would make sense to develop him further.

I still harbour a few doubts over the wisdom of a nine-book series, rather than taught trilogies – just compare the quality of Timothy Zahn’s Thrawn Trilogy, Kevin J. Andersen’s Jedi Academy trilogy, and Roger MacBride Allen’s Corellian Trilogy to some recent novels (the Coruscant Nights trilogy comes to mind), and you’ll see a huge difference. The Fate of the Jedi series, it must be said, is proving far more interesting and intriguing, with more potential than its predecessor – while the Legacy of the Force was still a very good series, with hindsight I can’t avoid the impression that the story was dragged out a longer than necessary: the ending was a foregone conclusion, therefore nine novels seemed excessive. Abyss, however, has done a lot to persuade me that a longer, more-epic series like this can work, as Luke and Ben’s discoveries in the Maw (and a few surprises nearing the end of the novel) have considerable potential to drastically effect the Jedi and the galaxy.

Fate of the Jedi has, therefore, plenty of opportunity and scope to develop in a number of ways. This should make it an exceptional addition to the Star Wars canon, and keep long-time fans satisfied and coming back for more, while also gaining the attention of new or skeptical readers. Abyss does an admirable job of answering some questions while also posing new ones, ensuring interest in the series remains high, with Denning’s writing showing that this expectation is well-deserved.

Sci-fi action in the classic style we’ve come to love and expect from the Star Wars brand, mixed with a greater attention to the political and philosophical (though without becoming pretentious or Trek-y), Abyss is a very enjoyable read. I would certainly recommend it to all fans of the Star Wars franchise, and I think new fans will also get a great deal of enjoyment from reading this series.

Posted by Civilian Reader at 2:43 AM