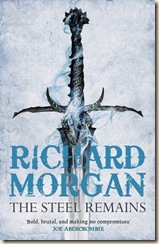 An excellent, bleak new entry in the modern fantasy genre

The Steel Remains is the story of three heroes, all comrades in and veterans of the recent, devastating war against the Lizard Folk, dealing with their new lives in a suffering, barely recovered land. They gave everything for a nation who now has given little, if anything, back in gratitude. All are conflicted, with their own agendas, scarred by their experiences. A new evil is rising in the land, unbeknownst to our heroes or their kinsmen.

Ringil, the hero of the slaughter at Gallows Gap, wielder of the mighty Kiriath blade, Ravensfriend, selling his tale for a pittance and a roof over his head at a rural tavern. Archeth, the last of her race, in the unpleasant employ of tyrannical Emperor Jhiral. Egar Dragonbane, clanmaster of a steppe-nomad tribe, struggling to consolidate what he saw and experienced as a mercenary. Each has his or her own thread of the story, seemingly unconnected at first.

Ringil is employed by his mother, at cross-purposes to his father’s own goals, to find a relative recently sold into slavery. Unfortunately for Ringil, the politics of Trelayne have changed considerably since he left, and power has shifted to new quarters where once he could have operated with impunity. With the tables turned, alliances shifting and malleable, Ringil finds himself battling a changed administration and walls thrown up to thwart him at almost every turn. His time away also allowed him to bury unpleasant memories from his youth, but when he returns they come back to him in a rush, forcing him to battle his own demons along with those living in the city.

Archeth is sent on her own mission to Khangset, to investigate some supposed reaver activity. Upon her arrival at the still-burning Khangset, however, it’s clear that something far more deadly than a band of pirates attacked the city. Picking up on the mad ramblings of a survivor, Archeth must unravel what befell the city and report back to Jhiral.

Egar, permanently effected by his time away from his people in the more cosmopolitan and civilised South, has to navigate the local, petty politics of his clan, entertained only by girls half his age with no interest outside their existing world (the former a positive, the latter an unfortunate negative). Egar also struggles with Poltar, the clan shaman, who bemoans the decline in tradition and respect for the old ways and nurtures a visceral hatred for Egar. Poltar wants a return to when his station was held in the utmost regard, before Egar went away to the South, when tradition and respect were important. Then the Gods start to talk to him…

Morgan’s approach to the fantasy genre is uncompromising and new. He has created a brutal world, still struggling to recover from its recent war, populated by a multitude of suffering lives. The people are hardened, and there are plenty of former soldiers now unemployed and, in many cases, destitute – abandoned by those they fought to protect. His three heroes are very different, and each adds a certain slant to their respective stories. Ringil, the disappointing third son of house Eskiath, with no taste or patience for courtly etiquette required of a man of his station (plenty notables are met with his fist, for example), his cynicism and sarcasm help add the occasional touch of dark humour to an otherwise bleak world and story. Archeth, the long-suffering pawn of Jhiral, struggling to find a place for herself in a land her people have abandoned her to. Egar, worldly and cynical of traditions and customs, trying to make sense of the parochial ways, needs and superstitions of his people.

The author’s approach to writing is very sparse – exposition and description are kept to a minimum, allowing the readers’ imaginations to fill out the details of the world he has created. The novel is, therefore, shorter than is normal for a fantasy debut, though it doesn’t in any way suffer from its brevity. In fact, Morgan’s prose will drag you on through the story, making any and all interruption irritating and unwelcome, so engaging is his plotting and characterisation. Some might not be comfortable with the directions he sometimes takes his characters and the story in (the scenes in the dwendas’ realm are frequently weird), and he is occasionally more graphic than expected. One thing that is for sure, this is fantasy for adults. The action and battle scenes are expertly crafted, and the author is able to portray the breathless unreality of them extremely well – it’s cliché to say so, but Morgan is able to make the reader feel as if they are right there, observing the action.

Showing that he is as adept at writing fantasy as he is science fiction, Morgan has introduced an engaging and complex group of protagonists, in a brutal and interesting world. He has taken many common tropes of fantasy and made them wholly his own (sometimes by sometimes twisting them beyond recognition), making The Steel Remains a fresh and original, contemporary fantasy. Coupled with his excellent and immersive writing style, there should be nothing to keep this series from being very successful.

Highly recommended, The Steel Remains is, in a word, superb. It certainly deserves to stand alongside the fantasy greats on everyone’s bookshelf.

The next book in the series, The Dark Commands, will be released July 15th 2010 (UK)

Posted by Civilian Reader at 10:05 AM