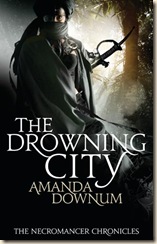 Amanda Downum’s debut novel, set in the dangerous, dark alleyways of a port city on the edge of a corrupt empire, is an intriguing and promising series beginning from a gifted new voice on the fantasy scene; one filled with original takes on popular fantasy tropes, an eye for detail, and an excellent, evocative writing style.

Isyllt Iskaldur, our protagonist, must find and finance a growing number of rumoured revolutionaries in the city of Symir, a home to exiles and expatriates, smugglers and pirates. On behalf of her country, who fears the Emperor’s attention has turned northwards, with an eye to conquest, Isyllt must help the eclectically-mixed Symir people bring down their distant Imperial rulers. A necromancer and a spy, accompanied by two unfamiliar mercenaries, she must find a way to complete her mission, topple the palaces of Symir, and prove herself to the crown and her mentor, Kiril (who seems to be the real power behind the throne, as someone actually aware of the international political environment). But, in a land where even the dead are plotting (a great addition to the story), and revolutionaries are not all on the same page, Isyllt will be lucky to escape with her life intact.

The Drowning City is filled with very interesting and inspired twists on familiar and popular fantasy tropes. Necromancy, for example, seems to be far more related to ghosts and spirits, rather than reanimation and zombies (though possession remains a concern). Downum has created a very intriguing system of magic in general, too – it is more functional than flashy, and isn’t used as a plot crutch when things get difficult. Her characters are well-rounded and almost uniformly complex and slightly damaged, which makes for engaging dialogue and internal monologues, as well as hidden motivations. From Isyllt’s lack of self-confidence, Xinai’s ruthless hunger for revenge, and Adam’s wariness around Isyllt (not to mention the complicating relationship between Adam and Xinai), the cast of characters are interesting enough and complex enough to offer plenty of scope for later instalments of the series.

The world Downum has created is more Asian in style and influences, which makes for another inspired and refreshing difference, evocatively brought to life in her prose. All too frequently, fantasy authors will create their worlds around an Italian-city-state base, or medieval European (though, to be fair, authors like Scott Lynch do this very well indeed), which makes The Drowning City a breath of fresh air. As someone who has lived in a number of Asian countries (just as Downum has), I think the author has captured the feel and flavours of Asian cities and locales extremely well, expertly transferring them to her world.

So far, so good. Indeed, the author’s approach to the supernatural and occult is also original and very well done: ghosts, for example, are actually scary, vindictive and everywhere. Nobody seems to be safe from their attempts at mischief and/or violence towards the living – for this reason, the whole city of Symir is warded against spiritual incursions. If you are familiar with the TV series Supernatural, you will appreciate Downum’s approach to ghosts and beasties.

Downum’s plot and feel for political intrigue is assured and well-executed, making this a far more involved read than many fantasy novels. However, it is also where the book suffers. For an opening novel, The Drowning City is actually surprisingly short given the task Downum has set herself. Traditionally, fantasy series start with a mammoth tome (600+ pages – just look at Scott Lynch’s Lies of Locke Lamorra and Kevin J. Anderson’s The Edge of the World). Some find these unwieldy and slow – which is often a reasonable opinion. However, given the amount of information presented to the reader in opening chapters of The Drowning City, I can’t help wishing Downum had written a longer book, taken more time to outline the factions and nations involved – the first two chapters were far too loaded with names and information, without leaving much opportunity for it all to percolate into our minds before bombarding us with some more! A minor gripe, but I did find myself flicking back to the handy map at the beginning to make sure I was thinking of the right nation(s).

Needless to say, this is a great opening volume in a series that promises a great deal. I’d recommend you leave yourself a good solid amount of time (minus interruptions) to get your teeth stuck into this, as it is a rewarding and original fantasy. Political intrigue, idealistic (read “naive”) revolutionaries exploited as puppets for greater powers, and a cast of interesting and complex characters, make The Drowning City a very satisfying read.

Posted by Civilian Reader at 7:15 PM