“Even”, by Andrew Grant (Macmillan) 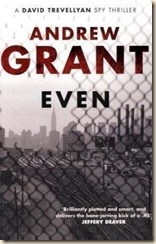 An exciting, important new voice in the thriller genre

After stumbling across a dead body in a Manhattan alley, things go from bad to worse for David Trevellyan. In New York working for the British Consulate (on a “communications” contract), Trevellyan has no way of knowing how much trouble he’s about to be in. He is arrested at the scene, accused of murder (complete with bogus “witness”), and held in lockup for an eventful night with Dereck the Nazi. Then the FBI get involved and his employers (the British Government) wash their hands of him. This all happens within the first couple of chapters – so far, so very intriguing.

As accusations and his supposed crimes escalate, and seeing no way to clear his name through legitimate, normal channels, Trevellyan decides to take matters into his own hands, despite the risks this entails; relying on his special forces skills and training to run down the true murderer and uncover whatever conspiracy decided he needed to take a fall. Dodging bad-guys and bullets, this is the story of how he got even with those who betrayed him.

Andrew Grant has written a truly excellent thriller. That this is Grant's debut makes it all the more impressive; his plotting is expertly and perfectly paced, his characters are well-defined and realistic, and the antagonists are suitably sociopathic (Lesley, in particular, is psychopathic). David Trevellyan is one of the best new protagonists to come along since Mitch Rapp (Vince Flynn) or Mark Beamon (Kyle Mills): tough, cynical, gung-ho, sarcastic, and sometimes emotionally cold (to a frightening extent on the last page). The story is great – a classic tale of a lone wolf looking for revenge, with a modern and edgy twist that will keep you hooked until the surprising last paragraph. In fact, this is more like two stories – halfway through, it seems like the story could be wrapped up, but instead a new thread opens (slightly related to the first), and the action ratchets up again as the scope is broadened.

Even has the feel of the first two episodes of a TV series – one in which the main character could be described as the international equivalent of Lee Child’s Jack Reacher – it introduces us to the character, shows us his motivations and quite a bit of background detail (done at the beginning of every chapter as short asides, related to the coming events). If Even doesn’t set the author up for a long, successful career, then there is something very wrong in the world of publishing.

I would recommend you block out quite some time for starting this - it's impossible just to dip in and out; it’s highly likely that you will be swept up from the very beginning. Grant's writing style is fast and engaging, so you will be up late into the night.

Grant has introduced us to an excellent new hero, and can write a damn fine action thriller. In my opinion, this is better than Robert Ludlum’s Bourne series.

Posted by Civilian Reader at 12:08 PM