“The Sheriff of Yrnameer”, by Michael Rubens (RandomHouse) 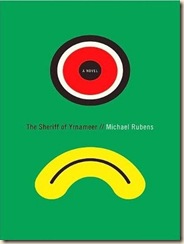 The Sheriff of Yrnameer is set in the future of our own universe. Planet Earth has been reduced to an irradiated pile of rubble, irradiated, still-glowing chunks of which can be purchased (no doubt for a reasonable price) with an “At least we got the terrorists” commemorative plaque.

Meet Cole: hapless space rogue, part-time smuggler, and the hero of the piece. When we first meet him, Cole is being dangled upside down by an alien creditor (also one of the universe’s most feared bounty hunters) who is trying to lay its eggs in Cole’s head – a most unpleasant punishment for gambling more than you can afford and then defaulting on the debt. The enforcer’s name? Kenneth.

His sidekick just stole his girlfriend. The luxury space yacht Cole just hijacked turns out to be filled with interstellar charitable types and their cargo of freeze-dried orphans (including one irritatingly gifted and earnest child, and one who is obnoxiously cute and therefore manipulative), as well as an especially loathsome stowaway. And Kenneth is still on their tail.

In this version of the future, corporations are king, and capitalism has run amok, taking over every facet of life. The Yrnameer of the title, is the last-remaining, unsponsored planet in the galaxy: an agrarian utopia populated to the saturation point by arty-types of all stripes. And so, reluctantly compelled to deliver these defenceless children and their wards to safety, Cole gathers his misfit crew for a desperate journey to the far reaches of the galaxy. Sadly for Cole, this legendary (artistic and independent) utopia is home to a murderous (and ever-shrinking) band of outlaws. After dealing with a few distractions on their journey (the aforementioned cargo of freeze-dried orphans; a corporate training satellite filled with bloodthirsty zombies), Cole eventually winds up on Yrnameer, only to find that the murderous bandits have threatened the planet’s inhabitants with death if they fail to hand over this year’s harvest (a good deed never goes unpunished). Through a series of unlikely, unfortunate events, Cole is appointed the Sheriff of the title, and charged with defending the people of Yrnameer, who couldn’t defend themselves from an irritated fly, let alone some bloodthirsty bandits – they’re artists, after all.

The Sheriff of Yrnameer is a delightfully absurd sci-fi romp. Robots and artificial intelligences are stupid, with the flexibility, imagination and vindictiveness of today’s government bureaucrats. Capitalism is everywhere – spam has graduated from our email junk-mail boxes to the high street; not to mention ad-bots, which appear pretty much everywhere (including orbit), and even dust motes carry brand-messages.

Perhaps the first author to get close enough to the spirit of Douglas Adams’s Hitchhikers’ Guide to the Galaxy to earn and deserve the comparison, Michael Rubens has written a mordant, highly amusing page-turner. Rubens approach to science fiction is original and observant, and The Sheriff of Yrnameer is a witty examination (and condemnation) of corporatism, dressed up in the guise of sci-fi-adventure-satire. He skewers the over-serious tropes of the genre, while retaining an obvious fondness for it, and sprinkles his tale with some fine geek humour (like Cole screaming “Control Z!” when he makes a wrong decision – “undo” on a PC). Every chapter will make you at least chuckle, which in these grim economic times is just perfect. The plot’s pace is pretty quick, and you’ll find yourself burning your way through the novel at a fair clip. Let’s just hope this isn’t the only one Rubens will write!

This is a great story, set in a wonderful (if also frightening) new universe (covered in sponsorship decals).

A must-read for all science fiction and comedy fans alike.

For fans of: Douglas Adams’s Hitchhikers’ Guide to the Galaxy, Spaceballs, Galaxy Quest