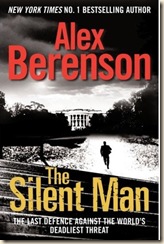 In this third outing for John Wells, a small, well-funded terrorist cell has hatched a diabolical plan to smuggle nuclear warheads into America in the hope of dealing the US a physical and symbolic loss it will not easily recover from. Putting together a daring, intricate plot to steal the warheads from Russia’s largest nuclear weapons facility (highlighting some potentially terrifying holes in nuclear security), these terrorists are highly-trained, able to blend into their environment and deadly in their single-minded focus on bringing fiery, radioactive destruction to America.

John Wells, following the tense events of The Ghost Agent, is enjoying some downtime with his fiancé and fellow CIA employee, Jennifer Exley, chafing at his new (ever-so-slightly) domesticated life. But, as Berenson shows us, Wells’s various adventures and missions have had a notable, lasting effect on his psyche, making it difficult for him to function properly out of the field. After a failed attempt on his and Exley’s lives, one of Wells’s decisions in The Ghost War comes back to bite him. Pierre Kowlaski, international arms dealer and all-round sociopath, decides to get revenge on Wells for the attack and humiliation he suffered in his own home. When Wells foils the plot on his life, Kowalski is left with only one possible out to save his life – offer information on the missing nukes, and pray Wells can see the bigger picture.

Berenson’s plotting and writing has slowed down a little (though, he was never as break-neck as Vince Flynn or James Rollins), and this makes The Silent Man a more tense, involved read – by revealing tidbits and his characters’ plans only piece by piece, he draws the reader along, keeping us hanging on ever sentence. The three strands of the novel take a little while to coalesce and meld, but when they do the pace does pick up. Wells’s impetuous nature works against him after his own botched attempt at revenge, taking a nice departure from traditional, infallible heroes common in this genre. Wells is no James Bond, and in many ways would make even Daniel Craig’s rougher, tougher version feel like a bit of a pansy. Also unlike James Bond, Wells (and also his colleagues) make quite a few mistakes, giving the novel and the characters a more genuine, realistic feel.

The author’s penchant for multiple international settings remains intact, taking Wells and others from the US to Germany, Switzerland, Iraq and Russia – all locations are perfectly realised and their different characters expertly portrayed.

There were nowhere near as many jokes in The Silent Man; not that The Faithful Spy or The Ghost Agent were comedies, but for this novel Berenson seems to have dispensed with all humour, keeping the novel’s intensity and tension notched up. This is maintained as Berenson shows how much counterterrorism relies on luck and happenstance – Wells and Co are aided unnervingly frequently by the terrorists bad luck, catching the scent of a clue only when the terrorists (or those helping them) slip up.

It’s difficult to hate the antagonists of the novel – Berenson does an excellent job of humanizing them, showing how it is circumstance that has shaped their prejudices and violent tendencies, twisting otherwise decent family men into jihadist murderers. As always, his characters –regardless of affiliation or centrality to the story – are all believably written. Each character’s flaws feel genuine and realistic, lacking clichéd traits or typical thriller tropes (except for Wells being a somewhat psychologically damaged protagonist).

Berenson’s prose are expertly composed, his dialogue believable and natural, and his plot is very tightly constructed. Slower than previous novels, but still a completely satisfying read, The Silent Man is a truly timely novel, superbly written, and one that should please all fans of the international thriller genre. Recommended.

Posted by Civilian Reader at 9:54 AM