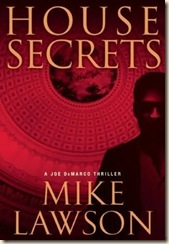 Joe DeMarco investigates the death of a reporter

In House Secrets, a retired congressman, Richard Finley, has asked Speaker of the House John Mahoney to look into the death of Terry Finley, his son and a reporter who covered politics for the Washington Post. Mahoney sends his ever-reluctant bagman, Joe DeMarco, to investigate; more to do a favour for Finley, as Mahoney (and the cops, coroner, and to begin with DeMarco) believes Terry’s death was an accident.

But, after just a little digging, DeMarco soon learns that Terry was investigating Senator Paul Morelli, a rising star considered a shoe-in for his party’s presidential nomination and the reputation of a golden boy. Terry was known as pursuing quixotic fantasy stories, more the demesne of the National Enquirer than the Washington Post, which only adds to DeMarco’s initial desire to quickly discard the investigation. This time, however, it appears that he might have been on to something big.

Senator Morelli has been luckier than most politicians, and his past has already been scrutinized by the press and political opponents, leaving DeMarco to believe that everything is above board and Terry’s death was nothing more than a tragic accident (kayaking in the dead of night is, after all, fraught with hazards). Then CIA agents and mobsters start to crawl out from under their rocks, and it becomes clear that things are not as they first seemed. Navigating through political waters populated by smooth-talking politicians and their Machiavellian aides, as well as thugs (either mob-affiliated or CIA-hired) and bitter, alcoholic political wives, DeMarco finds himself in a far more precarious position than he ever believed possible. Then, halfway through the novel, the ante is upped when things turn deadly.

Lawson’s writing keeps getting better and better. The first DeMarco thriller, The Inside Ring, was a perfectly balanced political thriller which definitely left me hungry for more. Despite a slightly uneven sophomore novel (The Second Perimeter), Lawson’s writing improved immensely in first House Rules and now again for House Secrets. DeMarco continues to be an engaging and interesting protagonist, and his supporting cast is equally well-written – especially the different relationships between DeMarco and, for example, Mahoney or Emma, his former-spy friend who has helped him out on numerous occasions and in ways even DeMarco isn’t aware of.

Brilliantly written, in House Secrets Lawson has taken the classic tale of Machiavellian political ambition in a new direction and made it his own. The plot unfolds at a perfect pace, twisting and turning, taking the reader in new directions and never predictable. The author’s prose are fluid and drag you forward through the novel, with dialogue that feels natural, and his realistic characters with plausible motivations and agendas.

An excellent story and plot, expertly executed. This is political thriller-writing at its most engaging, and once again I was left wanting more. Highly recommended.