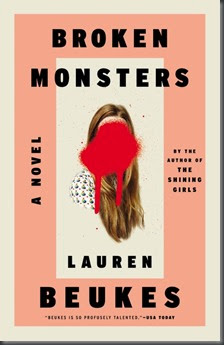 Detective Gabriella Versado has seen a lot of bodies. But this one is unique even by Detroit’s standards: half boy, half deer, somehow fused together. As stranger and more disturbing bodies are discovered, how can the city hold on to a reality that is already tearing at its seams?

If you’re Detective Versado’s geeky teenage daughter, Layla, you commence a dangerous flirtation with a potential predator online. If you’re desperate freelance journalist Jonno, you do whatever it takes to get the exclusive on a horrific story. If you’re Thomas Keen, known on the street as TK, you’ll do what you can to keep your homeless family safe — and find the monster who is possessed by the dream of violently remaking the world.

Broken Monsters is in many ways a novel of decline: of society, the city, sanity… But not, thankfully, of the author’s talent. Beukes is on top-form here once again, delivering a superb, surreal follow-up to The Shining Girls. It’s really very good.

Beukes’s prose throughout is excellent, and mixes classic elements of the police procedural with psychological thriller and suspense, a sociologist’s eye for a city in decline’s shifting character and troubles; then, she garnishes it with a dollop of supernatural strangeness.

The story unfolds at a good pace, the case moving forwards (and, at times, backwards) as the killer’s motives and spree escalates. It’s a really strange and bizarre MO, and the supernatural elements are understated and never definitively explained or realised (although, things do get very weird at the end).

One character who stood out for me is Layla, Detective Versado’s daughter: she’s hungry for knowledge, and feels unchallenged by her classes – therefore, she picks the most difficult and obscure of projects for homework. That she is so curious and well-read puts her in a strange place with her peers, as she struggles to sometimes connect with them. Alongside her relationship with her mother, Layla’s friendship with Cas, her attractive school friend, forms her part of the story. Cas is not quite a Mean Girl, but fits a few of the stereotypes, and has a secret past. Their friendship is fun to read about, and many of their exchanges are amusing. It reminded me of Megan Abbott’s novels, but with the crime thriller as a backdrop.

“Can I ask you something serious?” Layla picks around the shrimp.

“Serious like Dorian [crush]? Or serious like climate change? Because I’m sad for the polar bears and shit, but I don’t see how we’re supposed to make a difference on an individual level. Although I think using public transport helps.”

I found The Shining Girls to be a quicker read, but not necessarily a better read. Broken Monsters digs deeper into the psychologies of more characters, offering a smorgasbord of internal struggle and, as the title suggests, broken psyches (especially the killer’s). Beukes has populated the novel with a diverse range of characters, each with their own issues and hang-ups, not to mention agendas. There’s the attention-seeking journalist, for example, whose passion for “press freedom” keeps getting in Gabi’s way, as he sensationalises certain steps of the case. Everyone’s place is well-thought out, expertly plotted, and wonderfully realised. Not a single character felt unrealistic, and Beukes weaves their stories together very well. 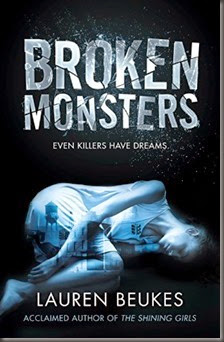 The novel also includes some excellent commentary on social media and our changing (for some all-consuming) relationships with the various platforms and apps we have come addicted to as a society. Facebook, for example, is described as “an anxiety engine”, which makes us jealous and nervous about the “amazing better life everyone else is having” – even though, too often, it’s all smoke and mirrors. The sentiment is one we’ve seen before, true, but the presentation and phrasing is different and excellent, and more naturally woven into the narrative. This is not David Eggers’s The Circle. There are scenes that include internet comments that are pitch perfect – the mixture of invective, misogyny, knee-jerk attacks, unconvincing “Jk! Why can’t anyone take a joke!?” comments after wishing prison rape on a thirteen-year-old girl… I really welcomed this side-bar commentary, so well presented and constructed.

Broken Monsters is published in North America by Mulholland Books, and in the UK by Harper Collins. It is out now.

Posted by Civilian Reader at 11:42 PM