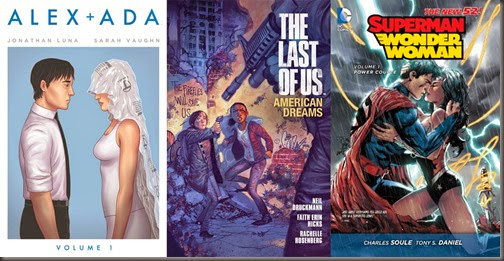 Featuring: Alex + Ada, The Last of Us, Superman/Wonder Woman 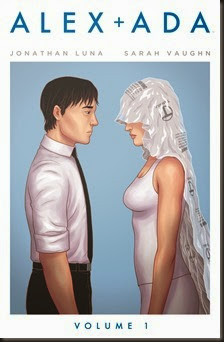 A sci-fi drama set in the near future. The last thing in the world Alex wanted was an X5, the latest in realistic androids. But after Ada is dropped into his life, he discovers she is more than just a robot.

I enjoyed this a lot – it’s a gentle entry point into the new series. Luna and Vaughn very easily and quickly situate the reader in this possible future, one in which robots/androids are common and technology is everywhere. It asks questions about identity, privacy and humanity.

The story moves along at a gentle pace, but never drags and is never dull. First, Alex must come to terms with the fact that he suddenly has an X5, an android that will do anything for him. His conscience wars with the knowledge that Ada is a construct, rather than a person. However, so lifelike she is, that he very quickly comes to question what he should do about her. Then he stumbles across the android freedom movement, and takes the first steps down an illegal road, but one that might bring him – and Ada – peace and more.

This is a really good collection, and I’d recommend it to anyone who likes their science fiction with robots and questions of awareness and consciousness. 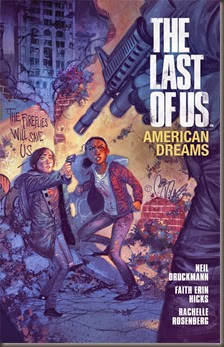 THE LAST OF US: AMERICAN DREAM (Dark Horse)

Nineteen years ago, a parasitic fungal outbreak killed the majority of the world’s population, forcing survivors into a handful of quarantine zones. Thirteen-year-old Ellie has grown up in this violent, postpandemic world, and her disrespect for the military authority running her boarding school earns her new enemies, a new friend in fellow rebel Riley, and her first trip into the outside world.

This ended up being far better than I was expecting. Set before the events of the smash-hit The Last Of Us videogame, it tells the story of Ellie, and her struggle against authority. It’s a very good, post-apocalyptic story – one that doesn’t glamorise the post-societal world. We get to learn a little bit about the different factions, and their tactics, as well as the dangers that face those who wander carelessly in this reality. I enjoyed this a lot. Recommended for all fans of the game, and also those who just like post-apocalyptic tales (I haven’t played the game, and still enjoyed this, so you don’t have to play the game to get it). 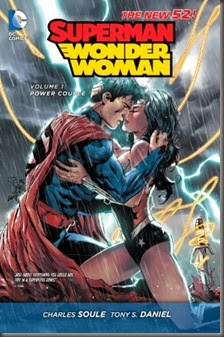 Beginning a bold new series that details the relationship between The Man of Steel and the Warrior Princess as writer Charles Soule (Swamp Thing) is joined by artist Tony S. Daniel (Batman) to tell the tale of a romance that will shake the stars themselves. These two super-beings love each other, but not everyone shares their joy. Some fear it, some test it-and some will try to kill for it. Some say love is a battlefield, but where Superman and Wonder Woman are concerned it spells Doomsday!

This was slightly disappointing. That’s not to say it was bad, just a little underwhelming. The potential to create some truly epic storylines is there, and perhaps it’s just a bit too early to worry about it not reaching its potential. But, after finishing this, I felt a little dissatisfied. I think the main issue I had with this book is that it feels all like set-up (probably for the Doomsday storyline that crossed a number of Superman-related New 52 titles – and, I think, just ended). The artwork is great, of course, and there are plenty of interesting elements to the story. I enjoyed seeing the two heroes worry about how to be in a couple – true, they’ve both been in them before, but unlike previous times, they don’t have to hide who they really are. Instead, they have to worry about what the other person wants, knowing what they do about their capabilities, backgrounds, etc. It added an interesting ‘domestic’ side to two of DC’s most powerful characters. It could be interesting, seeing this build in future collections and issues, as long as it doesn’t descend into schmaltz, and as long as the two characters maintain a partnership and neither becomes subordinate to the other – I’m sure we all know that I really mean Wonder Woman needs to not become a prop for Superman, which is something the creative team have avoided in this first seven issues.

I’m sure I’ll pick up the second volume, I just don’t know if it will be a high priority read. We’ll see. A cautious recommendation to everyone who wants to read more about Superman and Wonder Woman’s growing relationship. I remain cautiously optimistic about the series.