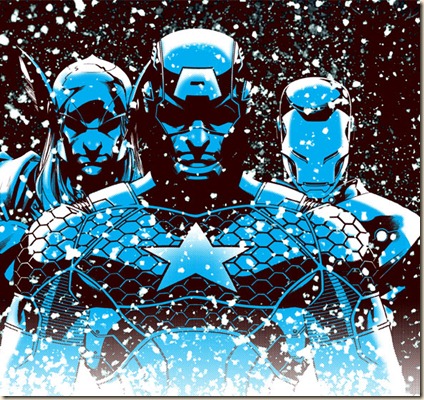 This is just a badass image. One of my favourite, recent pieces

In October 2013, Marvel will be releasing the first in a new series of original graphic novels. For those of us who tend to wait for collected editions of the monthly series, this is a great development. We’ll get a decent, “movie-length epic” (according to the press release). Here’s the premise for the first book, Avengers: Endless Wartime:

An abomination, long thought buried, has resurfaced in a war-torn land – but now it wears an American flag. Faced with another nightmare reborn, Captain America will not stand for yet more death at the hands of a ghost from his past. Haunted by his greatest shame, Thor must renew the hunt for a familiar beast. Side by side with the great Super Heroes the world has seen, united to end the threats no one of them could face alone, the Avengers will stare down the greatest threat the team has ever faced. But is even their combined might enough to overcome a force of pure evil?

So, that’s a little vague, but couple this synopsis, the title, the fact that it’s written by Warren Ellis, and also the cover (below), and I think this is going to be pretty awesome. “Chart-topping” artist Mike McKone is providing the illustrations and, while I don’t recall reading any of his work previously, the preview pages suggest an interesting, attractive and clean art-style for the book. 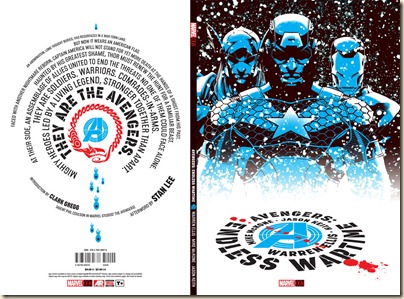 Warren Ellis, whose recent novel Gun Machine has received rave reviews for all corners of the reviewing public, had this to say on the project:

“When Marvel asked me to help re-launch their original graphic novel line, I had to say yes. Their total commitment, from story to design, made it a project I wanted to be part of.”

The graphic novel is bookended by an introduction from Clark Gregg, better known as fan-favourite character Agent Phil Coulson from The Avengers (and other Marvel Studios movies). There will also be an afterword from Stan Lee, who is one of the co-creators of the Avengers. 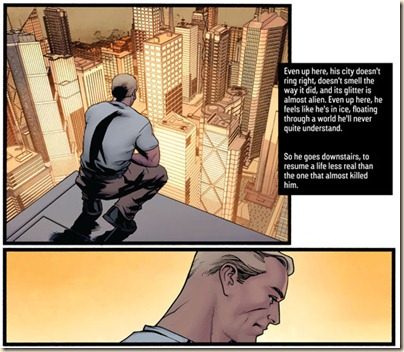 There’s something about Captain America’s character that really
lends itself to moody, cinematic shots.

Avengers: Endless Wartime will also be released simultaneously worldwide in North America, Italy, Spain, Germany, France, Brazil, Finland and Turkey. Every international edition will be translated into each their respective nation’s primary language. Which is a pretty cool initiative, and something that should be encouraged. (This is apparently the first time this will be done.)

And, finally, and as-normal-for-Marvel, the graphic novel will also include a free code for a bonus, digital edition of the book, redeemable through the Marvel Comics App and online in the Marvel Digital Comics Shop.

I’m really looking forward to trying this out. Roll on October.

Posted by Civilian Reader at 7:51 PM