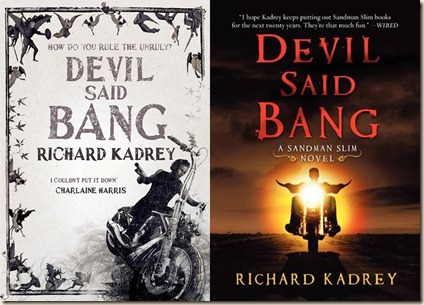 How do you rule the unruly? Sandman Slim in Hell! Again…

While ruling the denizens of darkness does have a few perks, James Stark isn’t exactly thrilled at the course his career (not to mention his soul) has taken. Breaking out of Hell once was a miraculous trick. But twice? If anyone can do it, it’s Sandman Slim. While he’s working out the details of his latest escape plan, Slim has to figure out how to run his new domain and hold off a host of trigger-happy killers mesmerized by that bulls-eye on his back. Everyone in Heaven, Hell, and in between wants to be the fastest gun in the universe, and the best way to prove it is to take down the new Lucifer, aka Sandman Slim aka James Stark.

Then again, LA isn’t quite the paradise it once was since he headed south. A serial killer ghost is running wild and his angelic alter-ago is hiding somewhere in the lost days of time with a secret cabal who can rewrite reality. And starting to care about people and life again is a real bitch for a stone-cold killer

Ah, Sandman Slim… One of the best Urban Fantasy series on the market reaches its fourth volume. If you’re looking for a gritty tale of Heaven, Hell, Nephilim, batshit crazy supernatural people and creatures, weird hoodoo, and weird shenanigans, there’s really no better series or author to turn to. This series is a must-read.

[Disclaimer: There are some minor spoilers for the previous books in the series, but I’ve tried to keep the review short and to-the-point.]

Devil Said Bang begins with James “Sandman Slim” Stark settling in to his new role as Lucifer. He’s not having the easiest time of it, though, as old political forces push back against a dirty mortal(ish) taking over the role of Lord of Hell. The longer he stays in Hell, Stark realizes that “you can’t play the Devil without becoming the Devil,” and finds himself inextricably locked in the middle of Hellacious squabbling and ever-ongoing power-plays.

In addition, Stark discovers that there’s a lot more to Hell and its denizens, particularly the Hellions, than many might originally believe. For example, their recently-abortive war with Heaven was a lot more than a power play. Millennia spent relegated to Hell, it turns out that the Fallen have become somewhat… depressed, and more than a shade suicidal. As Stark asks himself at one point, “How do you lead an entire civilization of wrist cutters?”

“The war with Heaven wasn’t a war. It was a suicide pact. Death by cop. Provoke the guy with the gun so he’ll shoot. Storm the gates of Heaven until the golden army burns you in a rain of holy fire.”

Halfway through the novel, Stark makes it back upstairs, and is reunited with his earthbound former-companions. Not all of them are happy to see him, a couple take his new job rather badly, and sadly a couple of important ones have moved on in their personal lives, leaving Stark in a bit of a tricky, lonely situation.

I really enjoyed the way Kadrey developed his version of Hell in Devil Said Bang. He adds yet more layers to this interpretation, expands his mythology and messes about with plenty of the Heaven-and-Hell norms.

To be honest, as much as I enjoyed the novel, this one didn’t feel quite as assured or confident as the previous novels. There’s some apocalypse stuff that seemed to come a bit out of nowhere, but it may have happened on one of my commute-reads (details can sometimes get a little fuzzy during those reads…). It’s nicely done, overall, but by the end of the novel, I wondered if the balance between Stark’s time in Hell and back in Los Angeles might have been slightly off. Not terribly so, but perhaps a little more was needed after he gets back to set the scene and properly build the potential-cataclysm.

Devil Said Bang doesn’t have as punchy a beginning as I’ve come to expect from Kadrey, but the novel does not suffer for it. I fell right back into the setting, and was always eager to get back to it. Kadrey takes a calmer (though no less eventful) approach to the novel. He deals with Stark’s first 100 days as Lucifer. It’s quite different to FDR’s, though I’m sure there was just as much backbiting in 1933…

The novel has an interesting ending, and I think Kadrey absolutely made the right decision for Stark going forward. (Yeah, that was vague. Go read the series.)

As always, a dark pleasure to read a new Sandman Slim novel. I loom forward to Kill City Blues (published July in the US and August in the UK).