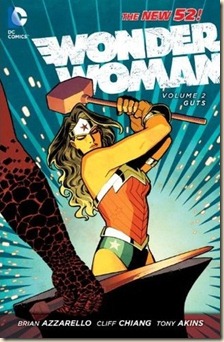 Wonder Woman goes to hell! After playing Poseidon, Hades, and Hera against each other, Hades strikes back by kidnapping Zola and trapping her in the Underworld. It’s up to Wonder Woman — with a little help from the God of Love and the God of Smiths — to break Zola out. But what is Hades’ real game, and once you get into the land of the dead, how exactly do you get out?

I rather enjoyed the first collection of Azzarello’s run on Wonder Woman. Chiang’s artwork is great, and Azzarello’s story has some surprises and is a pretty interesting interpretation of Greek Mythology. Where the first collection, “Blood” was strong, “Guts” didn’t live up to my expectations as much as I had hoped – mainly because there’s a bit of a weak middle-section. Otherwise, though, this is still pretty interesting and it does end on a strong note.

One of the first things that jumped out at me in this book is the sinister, predatory, almost evil character Azzarello imbues the Amazons with (it involves the methods they employ to reproduce…). Wonder Woman and her allies have travelled to Mt. Aetna, seeking the help from Hephaestus (the gods’ weapon-maker). Over the course of the first chapter of “Guts”, we learn of the fate of male offspring of the Amazons, which shocks Diana’s impression of the Amazons’ culture to the core.

While in the company of Hephaestus, we also get the Wonder Woman-equivalent of the “Guns, lots of guns” scene in The Matrix. Only, they don’t just pick up guns (Wonder Woman has, initially, a more conventional, traditional approach to weaponry). 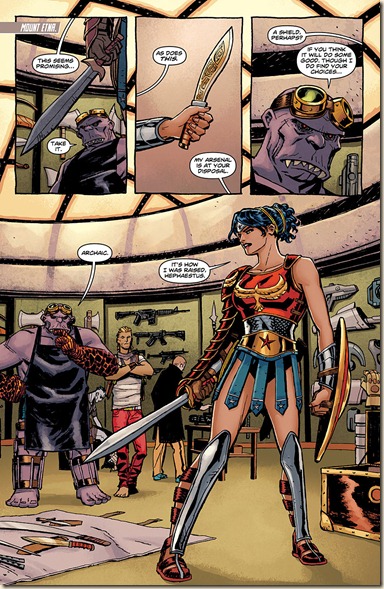 Issue #9 onwards dropped a little in quality, I must say. The story becomes a little more odd, and gets just a tad silly. I still really enjoy the depiction of Greek mythology and so forth, but the story just didn’t feel as strong as past issues. The ending to issue #10 was… A bit meh, too. I’m not sure if it was meant to be a morality tale, or a clunky attempt at a future-redemption tale. Or if it was just a long lead up so they could have that final page, when Wonder Woman employs Eros’s guns in a particular way. I’m just not sure what to make of it. I didn’t hate it by any means, but it was an oddly-written issue.

Ultimately, Wonder Woman has become a tale of squabbling families, deals and bloody betrayals. Which is rather appropriate, I think, given the Greek Mythology that infuses Azzarello’s version of the Wonder Woman story (I have no experience reading any previous Wonder Woman series or storylines, so I can’t comment beyond this). The final chapter ends with a nice twist, before offering quite the tease for the next story arc.

I really love Cliff Chiang’s artwork. Atkins & Kano’s issues/chapters do a very good job of matching Chiang’s style, but we start to see some odd touches coming through (for example, exaggerated facial expressions – particularly Strife’s). Thankfully, Chiang returns for issues #11 and #12. The depiction of Hell is pretty interesting, too. 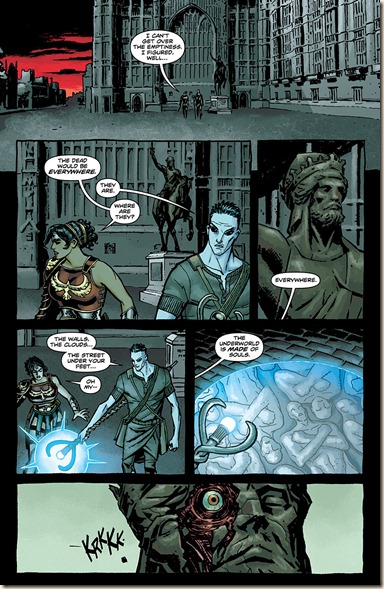 Although, I’m not sure why a Greek god would re-create a hellish version of London… (Despite some earlier issues taking part there, Diana and everyone else in this series is either a Greek God/myth or American, so London is an odd choice, no?) 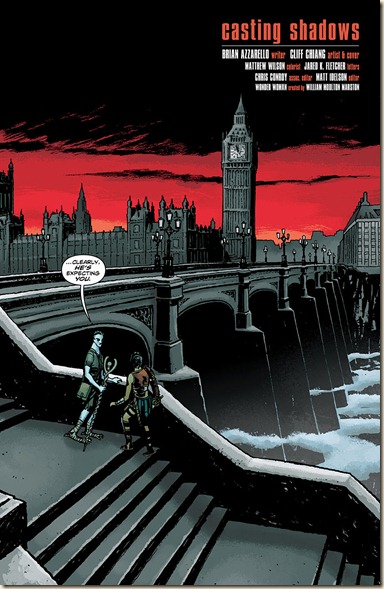 To be honest, I didn’t like this collection as much as Volume 1. Despite the very strong artwork and aesthetic, Azzarello’s story (particularly the botched wedding/romance with Hel in the middle) just failed to grab my attention. Nevertheless, apart from that mid-point wobble, it is still not a bad read – I just think there have been better issues in the series, and Azzarello has definitely produced some better comics. If you’re a fan of more “modern” approaches to classic comic heroes, then I think you’ll find something in here to enjoy and meet your needs. 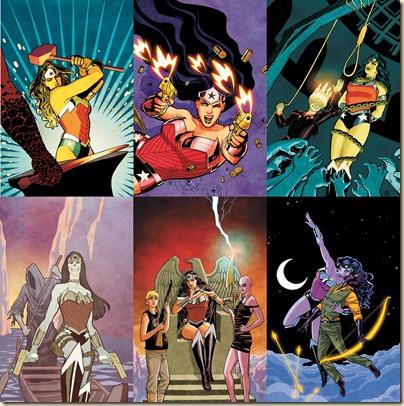 Further Reading: The Atlantic ran a story on their website about Azzarello’s Wonder Woman, “Wonder Woman’s Violent, Man-Pandering Second Act” by Noah Berlatsky (who also runs Hooded Utilitarian), which I thought others might find interesting. I also had more to say about the article than I did about the book, so if you’ll indulge me… 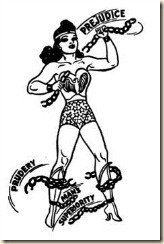 Berlantsky believes Azzarello has betrayed the original intent of Wonder Woman’s creator. William Marston, who seems to have been quite the polymath in his day, created the character of Wonder Woman sometime in the mid-1940s, in reaction to the comics available at the time. Me being me, I tracked down the original article, and it’s pretty interesting, so I’ve included a couple of quotations from it, below.

In The American Scholar, Marston wrote that, “from a psychological angle” the comics of that era’s “worst offense was their blood-curdling masculinity.” (In “Why 100,000,000 Americans Read Comics”, Winter 1943/4 issue, pp.35-44, in case you’re interested in tracking it down). Berlantsky offers a nostalgic run-down of the classic ideals Marston brought to his series (space kangaroos!), and then moves on to how Azzarello has broken with it. I should mention from the outset that all I’ve read of the character has been the first two volumes of the New 52 series, and a few Justice League-related books (including Geoff Johns’ New 52 iteration of that series as well).

I won’t deal with everything from The Atlantic article, but there is one thing I’d like to pick up on. Specifically, the guns.

“Chiang’s interior cover for issue #8 shows Wonder Woman leaping from the side, shooting two golden pistols while discarded golden shell cases rain down around her — the insufficiently swaggering golden lasso nowhere in sight. Elsewhere in the series, we get to see Wonder Woman shot in the chest; a woman displaying her gashed open and bleeding arms, a giant devouring monster zombie creature, and another interior cover showing Wonder Woman with a death's head toting those cool golden guns again.”

Berlantsky has a point, in some respects. But, given the ending of issue #10 (which I mentioned above), there is a little bit more to it than the chance to just give Diana big, gold-plated (shiny!) guns. I do agree with him that the ending is “banal”, but perhaps I wouldn’t have used quite as strong a word. When maybe I should have. He goes on:

“The fact that the guns belong to the god Eros, and shoot bullets of violent infatuation just emphasizes that, for Azzarello, even love is a blood-curdling business best expressed through phallic firepower.”

Also possible, but part of me thinks Azzarello’s use of pistols may be more of a nod to Baz Lurman’s Romeo & Juliet (“Take up your .45-Magnum-semi-automatic swords!”) and the inspiration for updating classical weaponry for more modern firepower. I have absolutely no proof of this, though, so it’s entirely possible I’m wrong. It’s just an optional theory.

I think Berlantsky’s right, though, about Azzarello & Co.’s “eagerness to demonstrate the adultness of the adult content” of the New 52 series. But, I think he sadly does not appreciate Azzarello’s take on Greek Mythology:

“each [god/character] is rolled out to demonstrate their cool-as-shit, bad-ass powers and complicated dynastic motivations. Everybody – Hades, Wonder Woman, everyone – bargains and schemes and betrays and manipulates everyone else. It’s a god-eat-god world out there – and one built, in every way, on blood”

This is, actually, a pretty faithful interpretation of Greek mythology. In some ways, then, despite the obvious added masculinity, Azzarello has returned Diana’s story and that of her supporting cast to a point closer to the source material? True, this defeats the intended “purpose” (for want of a better word) of the original series, but it is nevertheless an interesting story. Comics writers are frequently criticized for trying new things with characters (often, it is met with Screaming Denunciation from long-time-fans, and bemused incredulity from newer readers).

Berlantsky’s article has an interesting omission, though, which I think supports his point even better than Diana taking up twinned fire-arms. One could argue that there is even more “blood-curdling masculinity” in the way Azzarello changes Diana’s classic weapon. Berlantsky says the guns are more attractive to the “(much smaller) audience of (mostly) men in their 20s, 30s, and 40s” than Wonder Woman’s Lasso of Truth. (I always thought it was a whip, but that could just say something about me…) In this book, Hephaestus gives Diana a different whip (definitely a whip this time), which can cause some pretty nasty, fiery damage/pain/destruction. Surely it is the bastardisation of her traditional weapon (“tool”? “Accessory”?), the one that set her apart as the hero who settles conflict non-violently, that is more indicative of the shift Berlantsky wants to highlight?

Ultimately, the article finishes on a note I agree with: the justification of (using Berlantsky’s terminology) “blood-curdling masculinity” as a short-hand for “maturity and realism”. Or, in fantasy community terminology, short-hand for “grimdark”!

Not mentioned in Berlatsky’s article is a Marston quotation, also from The American Scholar, his reaction after an attempt to submit Wonder Woman to a comics publisher:

“A male hero, at best, lacks the qualities of maternal love and tenderness which are as essential to a normal child as the breath of life. Suppose your child’s ideal becomes a superman who uses his extraordinary power to help the weak. The most important ingredient in the human happiness recipe still is missing – love. It’s smart to be strong. It’s big to be generous. But it’s sissified, according to exclusively masculine rules, to be tender, loving, affectionate, and alluring.” 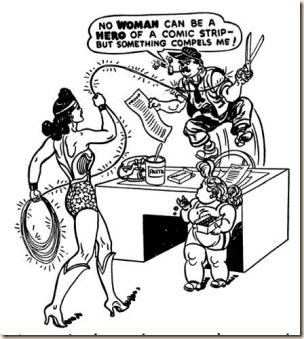 A lot of the article is rather dated, but there’s something nice about reading an article by a writer back in the 1940s who was so clearly irritated by male-domination of comic literature. I also rather liked this passage from Marston’s article, with regards to why people read comics:

“Nine humans out of ten react first with their feelings rather than with their minds; the more primitive the emotion stimulated, the stronger the reaction. Comics play a trite but lusty tune on the C natural keys of human nature. They rouse the most primitive, but also the most powerful, reverberations in the noisy cranial sound-box of consciousness, drowning out more subtle symphonies. Comics scorn finesse, thereby incurring the wrath of linguistic adepts. They defy the limits of accepted fact and convention, thus amortizing to apoplexy the ossified arteries of routine thought. But by these very tokens the picture-story fantasy cuts loose the hampering debris of art and artifice and touches the tender spots of universal human desires and aspirations, hidden customarily beneath long accumulated protective coverings of indirection and disguise. Comics speak, without qualm or sophistication, to the innermost ears of the wishful self. The response is like that of a thirsty traveler who suddenly finds water in the desert – he drinks to satiation.”