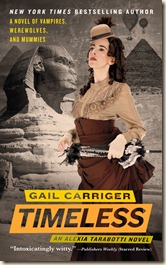 Alexia in Egypt; or, Pyramids, Mummies, and Hot Air Balloons

Alexia Tarabotti, Lady Maccon, has settled into domestic bliss. Of course, being Alexia, such bliss involves integrating werewolves into London High Society, living in a vampire’s second best closet, and coping with a precocious toddler who is prone to turning supernatural willy-nilly.

Until, that is, she receives a summons that cannot be ignored. With husband, child, and Tunstells in tow, Alexia boards a steamer to cross the Mediterranean. But Egypt may hold more mysteries than even the indomitable Lady Maccon can handle. What does the vampire Queen of the Alexandria Hive really want from her? Why is the God-Breaker Plague suddenly expanding? And how has Ivy suddenly become the most popular actress in all the British Empire?

With Timeless, the Parasol Protectorate series comes to a close. I first read about Soulless on the blog of Carriger’s agent, Kristin Nelson. I was sold on the book as soon as Nelson wrote, “If the author Jane Austen were to have written a vampire novel during her lifetime, SOULLESS would have been it,” and I was beyond excited to read it when it was finally released. Soulless proved to be worth all of that anticipation, and I have immensely enjoyed reading each instalment in the series. Timeless, luckily for me and all the rest of Carriger’s fans, is no exception: I loved reading it, and once again, I find myself eagerly awaiting the release of a Gail Carriger book – I can’t wait to get my hands on her next project.

Timeless begins “nigh on two years” after Heartless ended, with Alexia and Lord Maccon comfortably settled in a closet in Lord Akeldama’s home along with Prudence, an energetic toddler who does not like baths. One of Carriger’s great gifts is to take situations that are, even within the context of her already-quirky world, somewhat absurd, and make them appear completely natural. That is to say, despite the fact that Prudence has a werewolf for a father, a mother who can neutralize supernatural qualities, and a fashion-obsessed vampire as a nominal guardian, and can herself steal someone’s supernaturalness for the duration of a night, their household reads first and foremost as a sweet and loving (if unconventional) family. Even if Conall can’t touch his daughter after dark, Alexia must constantly restrain herself from subjecting her to scientific experiments to test the extent of her abilities, and bath-time can be interrupted by Prudence accidentally turning into a werewolf cub and escaping into the square.

We also see how the other major changes from Heartless have played out: the former Westminster Hive seems to be happily settled in Woolsey Castle, with Madame Lefoux less happily settled amongst them, and the formerly-Woolsey pack is adjusting to life in London. Biffy has come to terms with his werewolf state (if not the subpar grooming it entails), and Floote and Professor Lyall are each, in their own ways, as mysterious as ever.

Of course, this precarious balance does not last for long, and Alexia and family head to Egypt at the thinly-disguised command of the Queen of the Alexandria Hive who seems to be interested in Prudence, while Lyall and Biffy must investigate the disappearance of the Kingair pack’s beta, an event which will have consequences broader than either could predict.

As in Changeless and Blameless, Carriger takes us beyond the usual setting for Victorian fiction (with or without vampires and werewolves). Seeing Egypt and the Alexandria hive, which turns out to have been involved in the country’s history since the time of the Pharaohs, was really interesting, and her Alexandria is really nicely-realised. I occasionally found myself wishing that Carriger had delved a bit more into the nitty-gritty of the politics at work, though: it would have been nice to see how this version of Victoria operated on an imperial level, but that might be more a personal curiosity of mine than something that was necessary to the plot.

I loved seeing some of my beloved supporting characters coming more to the forefront. Biffy, Lyall, and Ivy are all very active in this book, and all develop in striking ways that should make them very important in the future. I particularly enjoyed Biffy and Lyall’s plot: frequently, Carriger’s witty tone belies the depth of the characters and histories that she has created, but this depth is readily apparent in the growing relationship between the two werewolves. If only for these two characters, I can’t wait for the next Parasol Protectorate series (The Parasol Protectorate Abroad, with its first book planned for a Fall 2013 release – why must it be so far away?!).

I also enjoyed seeing how Lord and Lady Maccon and their relationship had changed since they became parents. Conall especially showed new sides of himself: he is less gruff and dominant around his daughter, and appears to be thinking about his future, and thus his supernaturalness, in ways that we haven’t seen before. Timeless is as concerned with looking forward to its characters’ futures as it is with wrapping up the plot of this series, and I found the way that this concern played out in Conall and Alexia’s story really interesting.

More than any of the other novels in this series, Timeless’s thematic concerns are directly related to its title. If Carriger’s characters have a central preoccupation beyond the immediate challenges of the plot, it is time: how one’s experience of it changes with immortality, and what to do with the time one has, whether it is all the time in the world or a mortal lifespan, far too much or nowhere near enough. Carriger elegantly weaves these concerns throughout the novel, using them to drive action and to deepen characters’ motivations.

Timeless is a great conclusion to the Parasol Protectorate series. It resolves the plotlines set in motion in the previous book in a way that is at turns sad, touching, and hilarious, and introduces a number of developments that promise great things for the future of these characters and this world. This book had me laughing out loud again and again. It also had me in tears. Carriger’s writing is funny, her characters are fresh, and her world is delightful. The Parasol Protectorate series is something very special.

Also on CR: An Interview with Gail Carriger