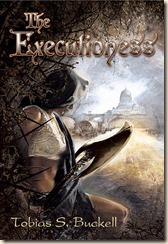 … I reviewed The Executioness by Tobias S. Buckell over on The Speculative Scotsman blog, yesterday. I haven’t had a chance to post a link until now, so sorry about that!

An enjoyable short story, it is an interesting introduction to a world with a very intriguing magic system. Here’s the synopsis:

Magic has a price.

In Khaim, that price is your head if you’re found using it. For the use of magic comes with a side effect: it creates bramble. The bramble is a creeping, choking menace that has covered majestic ancient cities, and felled civilizations. In order to prevent the spread of the bramble, many lose their heads to the cloaked executioners of Khaim.

Tana is one of these executioners, taking the job over from her ailing father in secret, desperate to keep her family from starvation. But now her family has been captured by raiders, and taken to a foreign city.

So Khaim’s only female executioner begins a quest to bring her family back together. A bloody quest that will change lives, cities, and even an entire land, forever. A quest that will create the legend of The Executioness.

The Executioness was the first fiction I’ve read by Buckell, despite hearing a great deal of praise for his writing. I’m certainly glad I read the short story, and I’ve since started looking for something else of his to read. If you have any suggestions, please feel free to leave them in the comments thread.

The story is one of two set in this new world, and I’ll be reading the second – The Alchemist by Paolo Bacigalupi – in the near future. I’d hoped to have it read for tomorrow, but I’ve been travelling, which has slowed my reading speed right down.

So, head on over to Speculative Scotsman for the review. And read everything else while you’re there – Niall’s is one of the best blogs out there, and I’ve been reading his reviews and articles ever since he started the blog.

Posted by Civilian Reader at 5:12 AM