A rather quick round-up – these were all interesting issues but, with the exception of Cobra, they all felt as if they were missing something important to make them gripping and necessary. Perhaps it was a lack of forward movement of the story; or a slight hitch in the plot due to lack of explanation; or, as in the case of one of them, just a big difference in sense of humour. Whatever it was, only Cobra really hooked me and lived up to previous issues. 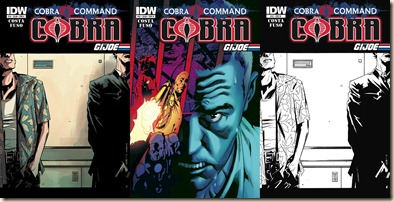 This was a very pleasant surprise. Heartfelt, and even a little touching, if you followed the first Cobra series and Chuckles’s role in bringing down the Commander. This issue is a worthy close to both the Cobra Command affair and also General Hawk’s tenure with the Joes. It rehashes a fair bit of what long-time readers will know, but it does it in a very nice, interesting way – the narration is provided by Chuckles’s final mission report. It’s quite melancholy, with a hint of gallows humour. It has the atmosphere and feel of the original Cobra comics (volumes 01 and 02), which are still among my favourites.

Costa really is very good at writing Joe-related stories. (I must give his DC work another try – I wasn’t too taken with Blackhawks #1, but maybe the series improved with time?) 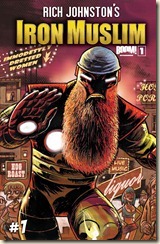 Trapped in a warzone, Al Stark has an epiphany: Americans are a superstitious and cowardly lot. I shall become a Muslim. Al, newly inspired, takes his jihad to New York City, and a showdown with a Freedom Fighter who resembles a certain Caped Crusader… part of THE AVENGEFULS saga.

What if Iron Man had been a radical Islamic terrorist? This is a… weird premise. I’m not really sure what I thought of it. There are shades of the Iron Man movie’s story – complete with the battle suit designed in a  cave in Iraq, only instead of it being a captured American weapons’ designer, it’s an engineer who’s (possibly) faking his religious fanaticism. Johnston gets some social and political commentary in. The humour’s quite sophomoric (I think it was meant to be tongue-in-cheek), and not really my kind of thing. Nevertheless, it’s an interesting, politically incorrect concept, and I can see people finding this quite fun.

There are two other issues in the series, building up to a finale: The Avengefuls. It doesn’t take a genius to figure out what’s being parodied. 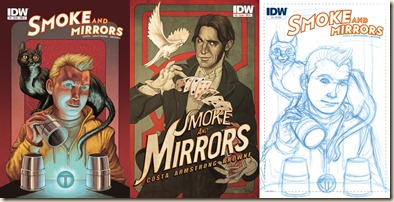 With just his slight-of hand skills, stage magician Terry Ward finds himself in a world he didn’t make – a world where sorcery is real! When he befriends a kid from this world, will danger come calling? You bet it will!

This is an intriguing series, but I wonder if we’d be able to figure out what was going on without a synopsis or reading about it…? It’s clear there’s something strange about Terry – only, we’ve not really been shown this in the story yet. The main thing, I think, is that the kid Terry befriends is the main focus of the story, and not Terry, so I’m kind of waiting for some explanation for, or background of how Terry came to be in this world where magic is real and central to people’s way of life. It’s a great concept, but there’s something missing in the telling and construction. I’ll keep reading it, of course, but I’m hoping for a little bit of explanation at some point. 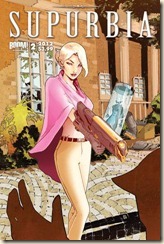 What goes down when the capes come off? Meet the “Real Housewives” of Earth’s greatest super-team, the Meta Legion!

As the Fritsche family tries to cover up Night Fox’s sordid affair and Hella Heart relapses into drug addiction due to Sovereign’s messiah complex, the rest of the Meta Legion is too preoccupied with their own personal problems to notice the evil lurking beneath the cul-de-sac’s surface...

SUPURBIA takes the familiar super-team and turns it on its head with a scandalous, TMZ-fueled look at what it's like to live with a superhero!

Eve, wife of the new man on the team, Mike, is still finding her way around the super-hero-occupied neighbourhood. There are more things going on behind the scenes (we only get a small glimpse of something related to the reveal that finished issue one). It’s an interesting issue, but we don’t see too much forward movement. The team spends most of the issue preparing for a new mission, while Even talks with some of the wives (and one stay-at-home dad) about their situation and lives as spouses of super-heroes.

I’m glad the series has been picked up to be an on-going, monthly series this summer. I think this has a lot of potential, and four issues was probably not going to be enough. With a longer series, this could end up being a fan- and cult-favourite.

This is good fun.

[This issue was actually released last week, but I was too slow to get it reviewed in time.]

* I’ll be in Canada this week, so expect reviews of a few of these titles to be added to next week’s comics round-up. Maybe. I’m also considering dropping single-issues entirely and focusing on graphic novels… As always, nothing is set in stone.