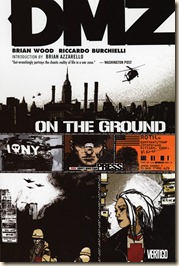 In the near future, America’s worst nightmare has come true. With military adventurism overseas bogging down the Army and National Guard, the U.S. government mistakenly neglects the very real threat of anti-establishment militias scattered across the 50 states.

Like a sleeping giant, Middle America rises up and violently pushes its way to the shining seas, coming to a standstill at the line in the sand — Manhattan or, as the world now knows it, the DMZ.

Matty Roth, a naïve young man and aspiring photojournalist, lands a dream gig following a veteran war journalist into the heart of the DMZ. Things soon go terribly wrong, and Matty finds himself lost and alone in a world he’s only seen on television. There, he is faced with a choice: try to find a way off the island, or make his career with an assignment most journalists would kill for. But can he survive in a war zone long enough to report the truth?

DMZ Volume 1 exceeded all my expectations. I can’t quite remember what made me pick it up in the first place, but I’m very glad that I did. DMZ paints a bleak, fascinating picture of a fractured America, and one man’s attempts to understand the wreckage. 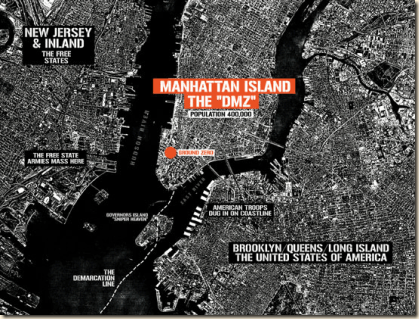 The book takes us through Matty’s first days in the DMZ. The network’s team is ambushed, and an injured, shell-shocked Matty must make it on his own. Well. Not entirely on his own – a kind stranger nurses Matty back to health, and shows him some of her Manhattan, teaching him some basic survival tricks. He appears to have all the equipment he needs to act as the only journalist working in the DMZ, and he starts filing stories of what life is really like in the DMZ. It’s a world he wasn’t really prepared for and Burchielli does a great job of bringing Manhattan to life – in all it’s broken, decayed, dangerous glory.

Later on in the book, we jump ahead a little in time, after Matty makes a temporary home in Stuy-Town, and he starts to venture further out in Manhattan. During his travels, we see him visit the zoo, the Lincoln Tunnel (with possible hints at a storyline to come), and many Manhattan neighbourhoods. The book is filled with interesting and original developments and ideas.

Matty’s first days draw back the curtain from his eyes: not everything he’s been told is true. It turns out, surprise-surprise, the information that filters down into the general population of the United States is highly politicised, sanitised and twisted. It’s as if the politics of fear that flooded across Washington D.C. and America in the wake of 9/11, and the domestic unrest and tension it helped foment, have finally boiled over and led to the fracturing of America. The commentary is obvious, but it’s nicely woven into the story of Matty’s struggles in the DMZ and the human story of his time there and the people he meets.

Manhattan is not just a DMZ: There are still neighbourhoods (sometimes violent and self-policing, it’s true), and a form of life goes on. Matty discovers the colour and diversity of Manhattan, and finds himself ever-more connected to the people he has decided to report on. DMZ doesn’t only paint a grim picture of the future – it’s an insightful commentary on humanity, society and politics.

Take the insurgency and urban warfare imagery of Mogadishu, Iraq, and Afghanistan, then transfer it all onto a New York City torn apart by a second civil war: That is DMZ. And it’s brilliant.

This is a fantastic story and premise, expertly written and realised. The artwork adds brilliantly to Woods’s story, bringing the characters to life on the page. The New York he paints is recognisable and also alien – the urban decay, the colourful inhabitants, their rather bleak lives… With the new, dystopian society that has arisen in the neighbourhoods, the increasing urban decay, the frequent gang violence and occasional US military incursion, this is a very intense story, and Matty is a superb guide.

Engaging and addictive, DMZ is highly recommended, and Woods has shot up my list of favourite comic authors. I must read more of his stuff! (Starting with DMZ Volume 2…)

Posted by Civilian Reader at 6:06 AM