As Pyr recently sent me a handful of back-catalogue novels to review (Jon Sprunk and James Enge, most notably), I thought I’d just take an opportunity to draw your attention to four upcoming releases from the US publisher. It would appear that Pyr are the US publisher for many titles we Brits will know as part of Gollancz’s stable of fantasy and science fiction authors. The four below (excluding the first), however, seem to only have US release dates thus-far.

First off, one that’s already available in the UK: 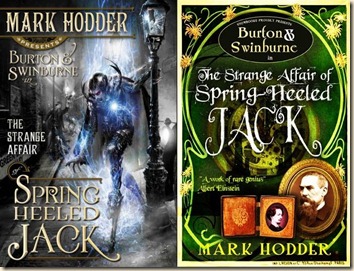 Algernon Charles Swinburne — unsuccessful poet and follower of de Sade; for whom pain is pleasure, and brandy is ruin!

They stand at a crossroads in their lives and are caught in the epicenter of an empire torn by conflicting forces: Engineers transform the landscape with bigger, faster, noisier, and dirtier technological wonders; Eugenicists develop specialist animals to provide unpaid labor; Libertines oppose repressive laws and demand a society based on beauty and creativity; while the Rakes push the boundaries of human behavior to the limits with magic, drugs, and anarchy. The two men are sucked into the perilous depths of this moral and ethical vacuum when Lord Palmerston commissions Burton to investigate assaults on young women committed by a weird apparition known as Spring Heeled Jack, and to find out why werewolves are terrorizing London's East End.

Their investigations lead them to one of the defining events of the age, and the terrifying possibility that the world they inhabit shouldn't exist at all!

One of the few instances when I like the US artwork as much as I like the UK artwork. Both very different, almost suggestive of different genres entirely, but both are also pretty interesting. I’m not sure if/when I’ll have a chance to get to read this, but if I find the time, I’m certainly intrigued. 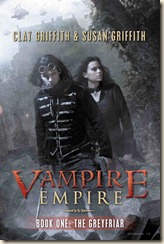 Next up: Clay & Susan Griffith’s The Greyfriar: Vampire Empire Book One

Princess Adele is heir to the Empire of Equatoria, a remnant of the old tropical British Empire. She is quick with her wit as well as with a sword or gun. She is eager for an adventure before she settles into a life of duty and political marriage to a man she does not know. But her quest turns black when she becomes the target of a merciless vampire clan. Her only protector is the Greyfriar, a mysterious hero who fights the vampires from deep within their territory. Their dangerous relationship plays out against an approaching war to the death between humankind and the vampire clans.

Vampire Empire: The Greyfriar is the first book in a trilogy of “high adventure and alternate history”. Combining pulp action with a steampunk style, Vampire Empire brings epic political themes to life within a story of heartbreaking romance, sacrifice, and heroism.

My initial thoughts were: “Hm. More vampires… Mixed with steampunk.” This, actually, might work rather well. I’m still a newbie to the steampunk genre, having not read any of it (at least, not knowingly) but certainly intrigued all the same. 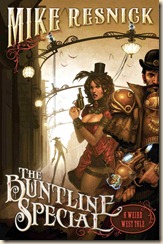 Welcome to a West like you've never seen before, where "Bat Masterson" hails from the ranks of the undead, where electric lights shine down on the streets of Tombstone, while horseless stagecoaches carry passengers to and fro, and where death is no obstacle to The Thing That Was Once Johnny Ringo. Think you know the story of the O.K. Corral? Think again, as five-time Hugo winner Mike Resnick takes on his first steampunk western tale, and the West will never be the same.

When I read this, my automatic point of reference was Will Smith’s Wild Wild West movie. This might well get me lynched among the sci-fi/fantasy'/steampunk world, but that’s just the way it goes. (And, I don’t remember the movie being quite as terrible as people made out – save the ending.) Needless to say, I like the Wild West as a setting for novels, and the combination of that and steampunk seems – to me – to be a winner. Definitely interested in reading this novel. (The fact that it’s subtitled “A Weird West Tale” almost suggests there might be more to come in the future…) 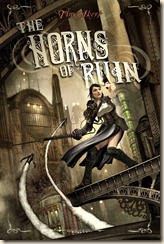 Eva Forge is the last paladin of a dead god. Morgan, god of battle and champion of the Fraterdom, was assassinated by his jealous brother, Amon. Over time, the Cult of Morgan has been surpassed by other gods, his blessings ignored in favor of brighter technologies and more mechanical miracles. Eva was the last child dedicated to the Cult of Morgan, forsaken by her parents and forgotten by her family. Now she watches as her new family, her Cult, crumbles all around her.

When a series of kidnappings and murders makes it clear that someone is trying to hasten the death of the Cult of Morgan, Eva must seek out unexpected allies and unwelcome answers in the city of Ash. But will she be able to save the city from a growing conspiracy, one that reaches back to her childhood, even back to the murder of her god?

Another author I’ve never read. Can’t remember when or where I heard of this first, but I really like the artwork (I know; “don’t just a book by its cover”…), but after reading the synopsis, my interest is definitely increased.

So, those are just a handful of books coming our way in the near future. Clearly, the global interest in steampunk continues apace, and I think the only lesson we can take away from this is that I really should read some! I guess I just worry that the idea I have in my mind of steampunk – an idea and imagery that’s always intrigued and attracted me – might not be what I find in here. I have Cherie Priest’s acclaimed Boneshaker, and it’s on that never-shrinking “to read” pile, so I’m sure I’ll start with that. At some point. As soon as I get more PhD work done, and a couple of Orbit and Tor releases read and reviewed.

Hope your interest has been piqued.

Posted by Civilian Reader at 10:49 PM