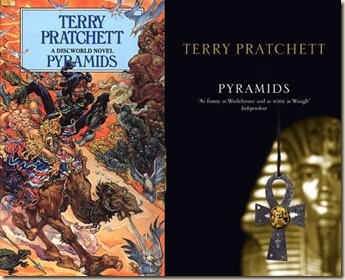 Pyramids, mummies, and assassins collide in this stand-alone Discworld novel

Being trained by the Assassin's Guild in Ankh-Morpork did not fit Teppic for the task assigned to him by fate. He inherited the throne of the desert kingdom of Djelibeybi rather earlier than he expected (his father wasn’t too happy about it either), but that was only the beginning of his problems...

Pyramids was the seventh Discworld novel, and is one of my favourite stand-alones in the series, although for some reason I’ve not re-read it that often. With my new-found commitment to reviewing older novels as well as new releases, I thought there was no better time to unearth Pyramids.

As always, Pratchett’s humour is spot on – even though this was an early novel, it didn’t suffer from the pun-and-joke-heavy nature (some might say ‘saturation’) of Colour of Magic, as it was clear the author was starting to become much more confident and comfortable in the world. There are still moments where the jokes, puns and gags come a little too fast and frequently, but for the most part, this is a well-balanced comic fantasy novel.

The novel starts with Teppic’s Assassins’ Guild final exam, interspersed with flashbacks to his time at the school, and memories of his father. It’s a good introduction to the Assassins’ Guild, offering an amusing portrait – particularly the importance of fashion, as interested in clean lines as clean kills:

“All assassins had a full-length mirror in their rooms, because it would be a terrible insult to anyone to kill them when you were badly dressed.”

Teppic’s memories of the school are great, and should bring a sense of nostalgia to anyone who went through (at least) the British school system – only, minus the instruction on the many ways to inhume someone... He’s an interesting character, and the novel follows his attempts to come to grips with his new-found divinity and position as King, in a land he knows little about. He was more comfortable and at home in Ankh-Morpork, yet his duty requires him to remain in Djelibeybi. He has to re-learn customs, language, and how to deal with his blinkered subjects and domineering High Priest. And then they build the largest pyramid ever, and everything goes… quantum…

We are also treated with Teppic’s father’s opinion on assassination and politics, how he justified sending his son away to learn at the Guild. King Teppicymon XXVII, Djelibeybi's god-Pharaoh, ponders the issue, and

“felt that while assassination was probably worse than debate it was certainly better than war, which some people tended to think of as the same thing only louder.”

Teppicymon’s a great character. As death on the Discworld is a rather subjective matter, he hangs around his body while it is being embalmed and mummified. It’s an interesting perspective that one wouldn’t really have thought about writing. He gloomily watches his own mummification, but slowly grows accustomed to the process (the exchange about which wrapping-cloth to use was particularly amusing among a selection of very funny scenes), not to mention acquiring an interest for his former subjects for the first time. The embalmers he listens to are very funny, very good caricatures of working-class temperament and thought-processes. We learn that Teppicymon was worried when he was alive about how he would explain if the sun didn’t rise, if the river didn’t flood, or crops didn’t grow. It can’t be often that someone like this suffers job/performance anxiety.

The Kingdom of Djelibeybi, which Teppic inherits, is a well-crafted parody of ancient Egypt, and Pratchett clearly had a lot of fun playing with the history and so forth.

“two miles wide and one hundred and fifty miles long, which was almost entirely under water during the flood season, and threatened on either side by stronger neighbours who tolerated its existence only because they'd be constantly at war if it wasn't there.”

The ‘science’ and economics of pyramids, living and dealing with camels, a nation of high-superstition and fear of the gods… this is really fertile ground for punning and satirising, and Pratchett makes the most of his subject material. I don’t think many pages went by without a single laugh, chuckle, or smile.

In Dios, the High Priest, Pratchett has turned his imagination to the Grand Vizier who does not so much pull strings from behind the curtain, but rather pushes his king behind it. He’s a different character than many Grand Viziers (most notably, all High Priests, apparently, are very clear about being different, higher creatures), but it’s clear that Pratchett drew on such characters to inform this parody and distillation of the Machiavellian subordinate. It’s amusing to read Dios’s reactions whenever Teppic takes initiative, or tries to be personable with his superstitious subjects, bringing his ‘foreign thinking’ home.

Any review of a Pratchett novel could be endlessly filled with snippets of the author’s text, so quotable is his writing – for example, Pyramids contains one of my favourite descriptions of human beings: “little bags of thinking water held up briefly by fragile accumulations of calcium”. You’ll also learn about the unlikely, greatest mathematicians on the Disc (which is another great, Pratchett-ian touch).

I could quote endlessly from this novel, but I shall just leave it with – you need to read this. Pratchett’s gift for writing – puns, prose, characters, everything – is on perfect display, and makes Pyramids a pleasure to read. The novel isn’t quite Pratchett’s best, although it was getting there. I still think his Guards novels are better than any other – a little less farce, better storytelling, superb characters and interplay between them, and more established, confident writing – but Pyramids is one of the better stand-alone novels in the Discworld series.

Filled with great satirical wit, Pyramids is a fun read, and highly recommended.

Posted by Civilian Reader at 3:57 PM