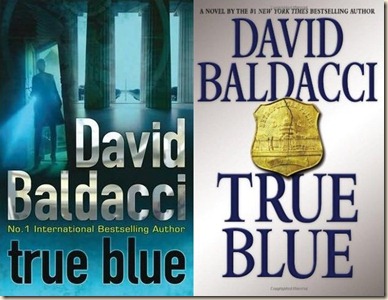 Mason “Mace” Perry was a firebrand cop on the D.C. police force until she was kidnapped and framed for a crime. She lost everything — her badge, her career, her freedom — and spent two years in prison. Now she’s back on the outside and is focused on one mission: to be a cop once more.

Her only shot to be a true blue again is to solve a major case on her own, and prove she has the right to wear the uniform. But even with her police chief sister on her side, she has to work in the shadows: a vindictive US attorney is looking for any reason to send her back behind bars.

Then Roy Kingman enters her life. Kingman is a young lawyer who aided the poor until he took a high-paying job at a law firm in Washington. Mace and Roy meet after he discovers the dead body of a female partner at the firm.

Their investigation into the lawyer's death reveals surprising secrets from both the private and public world of the nation's capital, and what began as a fairly routine homicide investigation takes a terrifying and unexpected turn into something complex, diabolical, and possibly lethal.

I was a little apprehensive about True Blue, it must be said. The main reason is that I tend not to like female protagonists written by men. Perhaps with the one exception of Arthur Goldman’s geisha in Memoirs of a Geisha, I don’t recall ever reading a main female protagonist who was anything other than a caricature of women. Take Lindsey Boxer, for example, from James Patterson’s wildly successful Women’s Murder Club series – she’s overly emotional to the point of ridiculousness (no woman I know cries that much and about half the things she cries about), and I have been unable to read any volume in the series since 5th Horseman (the ninth instalment of the series will be released soon).

In True Blue, Mace Perry is an entirely different woman. Firstly, and more importantly, she’s entirely realistic. She’s tough without being mannish, she doesn’t cry at everything, and she’s just… well, normal. Mostly. Her single-minded interest in becoming re-instated adds colour and explanation to her unwise actions, as she breaks and bends rules left-and-right (not to mention her abuse of her sister’s position as D.C. policy chief) to prove she is still good enough to be a Blue.

Roy Kingman is an equally appealing character, idealistic but also not immune to the lure of money (which is why he quit his CJA job for a cushy position in a law firm specialising in out-of-court deals). The dynamic that develops between Mace & Roy is interesting. It's not really made clear why he tags along with her to begin with, although it could be because his job is dull and that can’t be an easy thing for a former basketball star or CJA to live with – so maybe his interest in her starts as a result of boredom, as she barges in and accuses him (twice) of murdering his colleague. What happens between the two of them seems perfectly natural, and there’s no ridiculous or frothy puppy-love or swooning which, considering Baldacci is oh-so frequently (and erroneously) placed alongside Patterson, is a most welcome thing.

Even the ‘bad-guys’ aren't as uncomplicated as that might suggest. Questions about national security, black-ops, doing what’s necessary, the ease with which these can be manipulated (through malicious intent or not)... All these are themes that are brought up in True Blue. A couple of the antagonists are also humanised when we see them in their home/family environment, questioning their superiors and worrying about the morality of their mission.

All new authors wishing to make it in this genre should read this and take notes. I still think he’s one of the best in the business. The plot is very good, rattling along at typically fast pace – Baldacci’s books are usually typified by excellent pacing and tight writing, and this is no exception.

Very highly recommended, this is one of Baldacci’s finest.