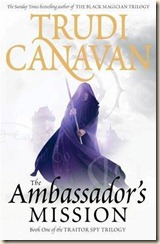 First, the synopsis and cover art for the new novel:

Sonea, former street urchin, now a Black Magician of Kyralia, is horrified when her son, Lorkin, volunteers to assist Dannyl in his new role as Guild Ambassador to Sachaka, a land still ruled by cruel black magicians.

When word comes that Lorkin has gone missing Sonea is desperate to find him, but if she leaves the city she will be exiled forever, and besides, her old friend Cery needs her help. Most of his family has been murdered – the latest in a long line of assassinations to plague the leading Thieves.

There has always been rivalry, but lately it seems the Thieves have been waging a deadly underworld war, and now it appears they have been doing so with magical assistance...

Sounds like it could shape up to be an interesting series. The Ambassador’s Mission will be released in the UK in May 2010.

Here again is Emma’s review of The Magician’s Apprentice: 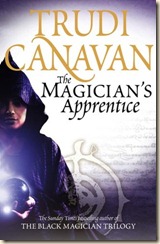 In the remote village of Mandryn, Tessia serves as assistant to her father, the village Healer - much to the frustration of her mother, who would rather she found a husband. Despite knowing that women aren’t readily accepted by the Guild of Healers, Tessia is determined to follow in her father’s footsteps. But her life is about to take a very unexpected turn.

When treating a patient at the residence of the local magician, Lord Dakon, Tessia is forced to fight off the advances of a visiting Sachakan mage - and instinctively uses magic. She now finds herself facing an entirely different future as Lord Dakon’s apprentice.

Although there are long hours of study and self-discipline, Tessia’s new life also offers more opportunities than she had ever hoped for, and an exciting new world opens up to her. There are fine clothes and servants - and, she is delighted to learn - regular trips to the great city of Imardin.

But along with the excitement and privilege, Tessia is about to discover that her magical gifts bring with them a great deal of responsibility. Events are brewing that will lead nations into war, rival magicians into conflict, and spark an act of sorcery so

brutal that its effects will be felt for centuries…

The Magician’s Apprentice is certainly epic, both in size and scope. At just short of 600 pages, it deals with the build-up to the war and the war itself from the viewpoints of Tessia in Kyralia, and Stara, a woman who also has an unexpected gift for magic and must find her feet in an unfamiliar world, this time in Sachaka. The author also dips in and out of several other viewpoints, including Dakon, Hanara the slave, and Jayan, Dakon’s jealous other apprentice. Although this adds other dimensions to the plot, it can make things confusing, and it can be frustrating when Canavan leaves Tessia in the middle of an exciting situation and then shifts to Stara learning about Sachakan customs, or vice versa. This happens far too often unfortunately, and made me want to skip ahead in places because I was impatient to get back to the action. Also, knowing Jayan’s true intentions lessens the impact of Tessia finding out what he is really like: it sometimes seems as though Canavan spells out too much for the reader when it comes to their relationship.

That being said, the parallels between Stara and Tessia are intriguing, and when the action does get going, the story certainly becomes gripping. She is largely successful at ranging across the two countries and really brings the land and characters to life. In particular, Canavan manages to create two strong and appealing female characters in Tessia and Stara, which is no mean feat considering they more or less share the book, and usually I would expect to like one viewpoint significantly more than the other.

The author also presents an in-depth exploration of war and the moral dilemma faced by the Kyralian magicians, without over-simplifying matters or really favouring one side over the other.

The book might have benefited from some more fearless editing: both plot and pace suffered from the sheer length of The Magician's Apprentice, and some of the detail could have been tightened up or eliminated altogether.

The Magician’s Apprentice is still a good read though, certainly for those who have read the bestselling Black Magician trilogy. Covering events several hundred years before that trilogy, the novel sets the scene for the formation of the Guild.

In general, Canavan’s writing is assured, her characters are well-rounded and varied, and she holds the story together over such a large canvas with reasonable success.

Followed by: The Magician’s Guild, Novice, The High Lord