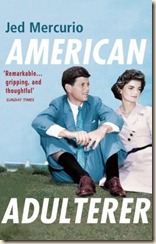 Like any womanizer, the subject of this novel must go to extraordinary lengths to hide his affairs from his wife and colleagues. But this is no ordinary adulterer – he is John F. Kennedy, the 35th President of the United States. Yet he is also a virtuous man enslaved by an uncontrollable vice.

With empathy and a dark wit, American Adulterer takes inspiration from the tantalising details surrounding President Kennedy’s sex life and medical secrets to weave a provocatively intimate portrait if the man’s affairs, illness, courage and idealism – and in JFK’s love for his wife, recreates one of history’s most fascinatingly enigmatic marriages.

JFK is one of the presidents I actually know the least about – the over-exposure of his presidency, his assassination and his place in popular culture always made him less interesting to me, beyond Oliver Stone’s superb movie, JFK (date). Given my considerable interest in the US presidents and their characters as well as their actions while in office, however, I thought this novelisation of JFK’s personal life might be worth a look, and be a more entertaining reading experience.

Sadly, having gone through it, I’m not really sure I liked it. The premise is interesting – Mercurio writes in the style of a clinical or psychiatric appraisal of JFK and Jackie Kennedy. This lends itself to a somewhat detached novel, always referring to JFK as “the subject”, but never really by name (Jackie merely referred to as “the First Lady” or “the subject’s wife”). This proved to be an interesting and intriguing read to begin with, but it quickly lost its novelty and started to become tedious – by its detached nature, it was difficult to care much about “the subject” after a while, even though the first chapter I found really very good.

Mercurio provides a short bibliography at the back and, being somewhat familiar with many of them, it becomes clear which sections of American Adulterer were influenced by which books. The more negative passages, scenes and scenarios were (in all likelihood) influenced by Seymour Hersch’s The Dark Side of Camelot, while the more complimentary segments were probably inspired and adapted from Robert Dallek’s superb An Unfinished Life. Mercurio notes that he’s taken some artistic license to write this book, which is completely fine and understandable (not to mention necessary, given the lack of a JFK autobiography).

This does not excuse some of his overly florid prose at times, whenever he veers away from the clinical detachment he seems to have wanted to maintain. For example, in a scene between JFK and Marilyn Monroe, Mercurio writes this (which frankly is just terrible):

“He glances at her blonde hair and the heft of her breasts, and soon he coughs his poison into her.”

There are interesting chapters – Cuban Missile Crisis, for example, but ultimately this is a book you will definitely need to be in the mood for, and I wouldn’t say this is anywhere near everyone’s taste. I imagine the fact that JFK is the subject helped get this book published and a fair amount of attention from the press (the laudatory pull-quotes on the cover are… misleading, in my opinion).

Thoughtful and insightful passages sprinkled among some pretty weird sections and scenarios; a weird writing style; and an erratic portrayal of the Subject make this a strange book that, while readable, will probably leave you either disturbed or irritated. When Mercurio tells us about JFK’s sense of entrapment, living in the presidential bubble – as opposed to the freedom he had pre-election when he could pursue his compulsive philandering without scrutiny, greater autonomy and freedom – the reader is instilled with some sense of empathy for JFK, but ultimately this is short-lived.

Not for everyone, I’d recommend reading one of the non-fiction biographies of JFK – definitely the aforementioned An Unfinished Life, but also the most recent, Vincent Bzdek’s The Kennedy Legacy, which discusses all the Kennedy brothers.

Could have been a lot better, but ultimately a flawed execution of an intriguing premise.